Out with the old…. 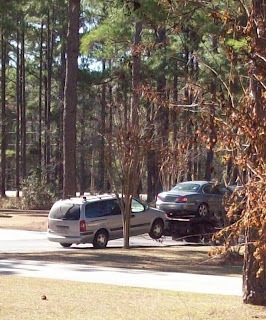 In with the new…

I love my new Toyota! It’s exactly the size and the color car that I wanted, and I love the husband more than ever for getting it for me. I have named it “Ebenezer” because I’m one of those oddballs who feels the need to give a car a name. I named him Ebenezer… not after Ebenezer Scrooge, which I had been this year, but in reference to I Samuel 7:12.  Then Samuel took a stone, and set [it] between Mizpeh and Shen, and called the name of it Ebenezer, saying, Thus far hath the LORD helped us.

Thus far has the LORD helped us.

This car isn’t just a set of wheels to us. It is a physical reminder, a big old stone of remembrance, of  how far God has brought us this past year. Exactly one year ago today, I watched as they towed away our family van to give it to the Cars for Kids charity. After braving two busy daughters, one road running mom, two large bucks, and a stubborn concrete median, the old gal had finally given up the ghost, and we decided that a donation was the best option. I even snapped a picture as the van~on~tow moved out of the neighborhood. Why I took the picture, I don’t know. I guess that I wanted to save it for such a time as this.

Patiently waiting isn’t always easy for me, and 2009 was no exception as I tried to manage sharing the (trusty?) old Nissan with that overscheduled teenager of mine who has to drive thirty miles in each direction just to get to school every day. To say that my magnanimous patience masqueraded as a private pity party more than a time or two is a teeny bit of an understatement. But wait we did, as we faithfully recovered from six months of unemployment in 2008,  the terrible horrible really bad no good year.  Not having car payments during that time had been a big blessing. Not having a car at this time, not so much.

So we trudged through 2009 with an ear to God and found a more solid footing. For several months, the husband has felt peace to take the plunge. I was the holdout. To be honest, my trust button is still on the fritz. Lurking in the back of my mind is a pesky little ghostie who whispers, “What if it happens again?”

But I decided to give my husband the gift of my trust this Christmas. And in return, he gave me a set of keys.

Thus far has the LORD  helped us.

I said all that (well, of course) to say this…


Yesterday was the day for my post Christmas pick up. Presents were put away on Friday and Saturday, but still I needed to tackle that mountain of papers, ribbons, and bows in the living room. It is a frustrating job because some of the paper is so beautiful that I feel the itch to make it twice useful. For a few years now, I have salvaged, ironed, and refolded the tissue paper from boxes and bags. This year, I decided to salvage my wrapping paper as well. Since my reuses are nothing new under the sun, I’ll just call it my “Well, duh!” project. 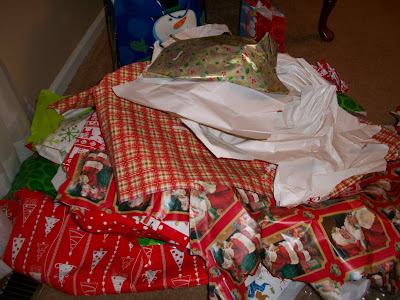 So I went through my stack of paper and found the really pretty ones with some usable space left on them. Some were beautiful and could definitely be used for all purpose wrapping like this beautiful green and ivory. 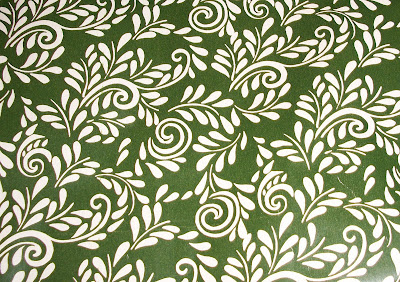 Others were definitely Christmas only papers but with endless possibilities 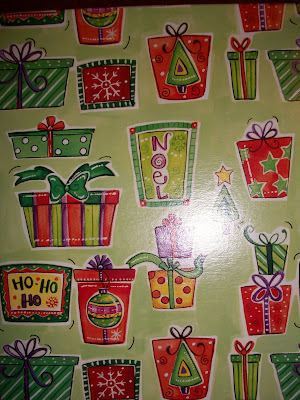 So I cut and pasted and folded and glittered and ribboned and ironed and finally shredded, and here's some of the fruit of my labor. Yes, I know, well duh. But the stuff is useful and the crafting therapy was good for what ails you on a post Christmas clean up day. 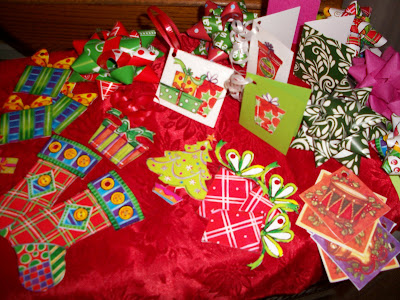 I made some bows for both Christmas and all purpose gifts. 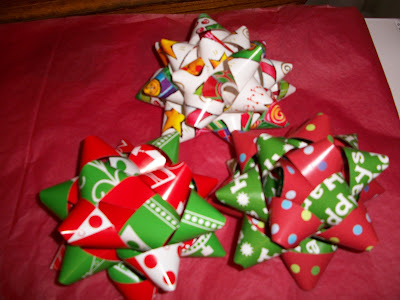 I really can't wait to use these matching tags. The pink bow, I'm a little iffy on since it was made with leftover tissue paper and looks a little too limpy. The green and ivory is my favorite. 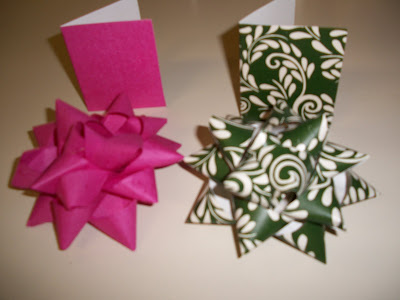 So after bows were made, and the tags were glitterated... 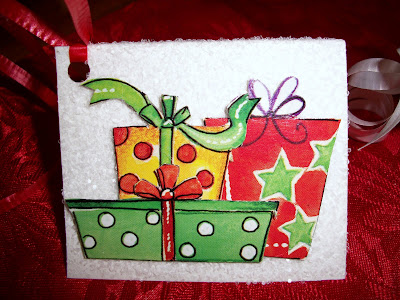 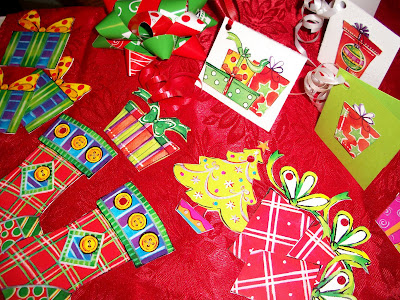 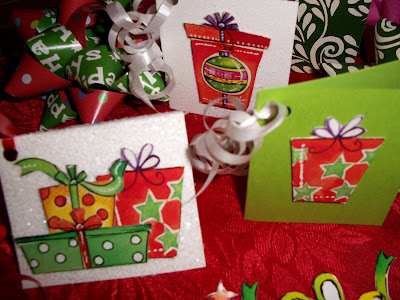 And and reusable tissue was ironed and restacked....
And the torn tissues in pretty colors were cut down to size to wait for more crafting therapy days... 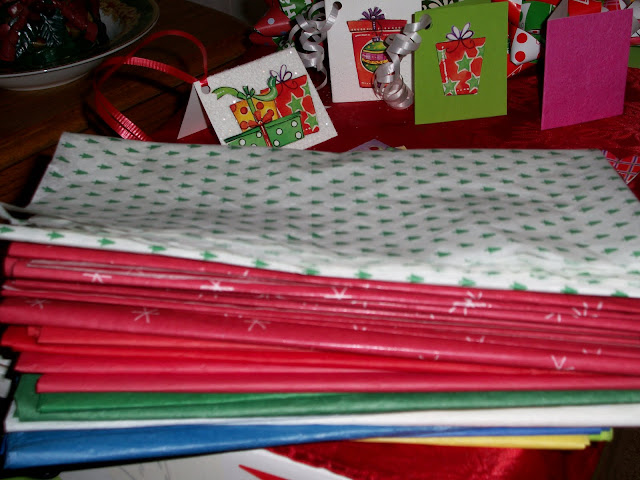 The rest was shredded... well, duh! 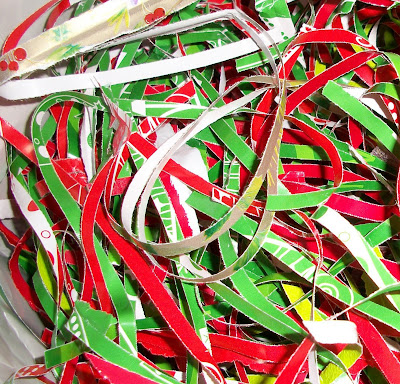 I did let the man of the house do the shredding. It's so pleasantly destructive for him and makes that rrrring noise that men seem to like. We kept the red and greeny Christmas shreds separate from the all season colors. 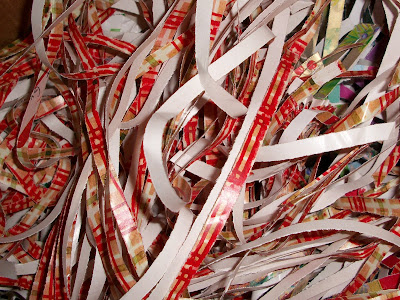 We're good to go. I did start a box with all of the scraps yet usused for future days when I need a little more craft therapy.
yakked by Debbie on Tuesday, December 29, 2009 0 comments yakked back

I once had a friend  who responded to just about everything that I said with a condescending and dismissive “Well, of course!” If I had what I thought as an ingenious notion to solve a recurring problem, and I mentioned it to her, she would retort, “Well, of course!”

...and if
I made the mistake of mentioning that notion to her,
I got the “Well, of course!”
Worse yet, and definitely the most hurtful was the, “Well, of course” I received when I shared any new-to-me revelation about God or light from the Word. This was back in the early days of my walk with Christ. Everything was new to me. (Still is...) Every passage, regardless of how many times I had heard it before,  exploded on the page with new meaning and direction.

I would think that I had stumbled upon some wonderful glimmer of eureka and (well of course) feel the need to share it with this woman, and...


Wham.
Well, of course.
I guess she prided herself on being too polite and cultured to say what she really meant. What she was really trying to convey, albeit without the accompanying slack jawed head wobble and eye roll was, “Well, duh!”


I guess I deserved the “Well, of course” since I ought to have learned my lesson and quieted that tongue of mine. After all, she couldn’t respond if I didn’t feel the urge to express every single thought.
Well, of course, I never did learn to hold my tongue around her. and I continually set myself up for the retort. We're no longer buddies.   I decided that she was one of those acquaintances too toxic for me. Yes, Christians can be toxic too… well, of course. So I stepped away from the person rather than learn to harness that tongue.

I did learn to treat the eureka moments of others, especially of those new to the faith, with a fair amount of respect and  consideration rather than some badly camouflaged, “Well, duh!”

386 words… a baby step closer to that elusive brevity
yakked by Debbie on Monday, December 28, 2009 0 comments yakked back

My Experiment in Brevity

So lately, because of a personal conviction, I began a Word study of the power of the spoken word. This morning, I was lead to a familiar verse.


A word aptly spoken is like apples of gold in settings of silver.
~Proverbs 25:11

I love that  proverb. It has always been beautiful to me because of the imagery of the thing. This time, though, I focused on the first part of the verse rather than that poetic stuff at the end. I was curious to know exactly what was meant by a word  “aptly spoken”. The study didn’t disappoint.


Literally, the words mean
word upon its wheel.
I like that.
More imagery.

A Word, a word upon the wheel,
is like an apple of gold in a setting of silver.

Now, I’m not sure what an apple of gold is scripturally, but I’m pretty certain that anything golden, when set in silver, must be a thing of great value. I’m going to trust that it is and leave that study for another day..

So what’s this thing of great value?  John Gill, one of my favorite of those old dead commentators, says this:


“ A word spoken on its wheels  keeps due order, is well put together, easily, and fluently delivered to proper persons, adapted to their circumstances, and seasonably spoken."


Matthew Henry adds that it :


agrees with the character
the person speaking."

Now, that’s what I want my words to be.

Unfortunately, my words tend to have more the imagery of  wheels flying off of their axles, hurling every which way, bopping others in the face, and rarely, if ever reaching their intended destination or serving any useful purpose at all. That’s the result of talking too much. You yammer along, word after word, syllable after syllable, until you morph into Charlie Brown’s teacher.

And then, when you do have that golden apple moment, you are the tree falling in the forest with no one around to hear it. Everyone has scattered to avoid the sound of your noise.

So, I’m putting some serious effort into practicing the art of the verbal edit. I read somewhere (and I don’t know if this is true), that a typical woman uses over 16,000 words in a given day. Since I’m an above average talker,  it presents a bit of a problem. What am I going to do with all of those excess words that race around in my head? They have to light somewhere.

This brings me to the purpose of my little blog. I already keep a journal for my ramblings, but because a journal is private, it's also a place where words are allowed to fly off their axles.  Here, I’ll try to practice the art of the edit and maybe, I'll finally master the concept of brevity. Maybe, just maybe, the skill will transfer from the fingers to the mouth.

So far, this word count is 539. I’m not off to a terrific start in the brevity department, but if you consider how many words I could have said in the time it took to write this, I’m doing pretty well.
yakked by Debbie on Saturday, December 26, 2009 2 comments yakked back