I've been a busy Christmas elf
for the past few days.
Between teaching school,
shopping, and
decorating,
I've had time for little else.
The decorating is not quite finished, and frankly, I've made a bit of a mess while doing it.  I tend to decorate the same way that I cook.  I use the Slobinski method.
But...
I did finish my kitchen
so I decided to show my kitchen table
for Tablescape Thursday.
It's a snowman table. 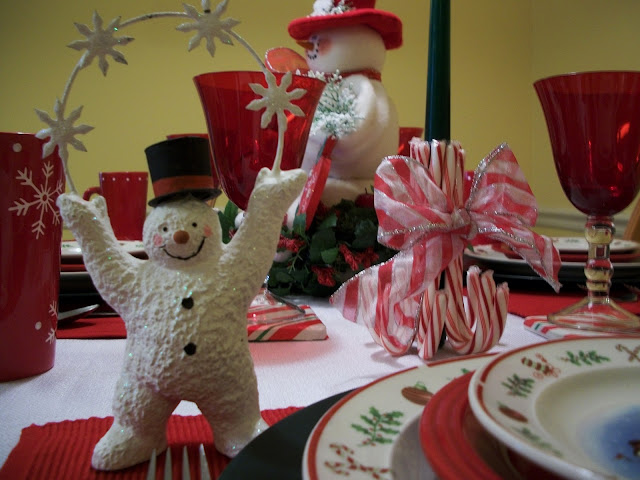 I was really excited to decorate the kitchen this year. If you recall, I finally removed my 1980s wall paper. This is the first time that I can go crazy with red and green in my kitchen.
So that's what I did.
I used deep green chargers and some plates that I found at a local discount store a few years ago. We use them for every day during the season. 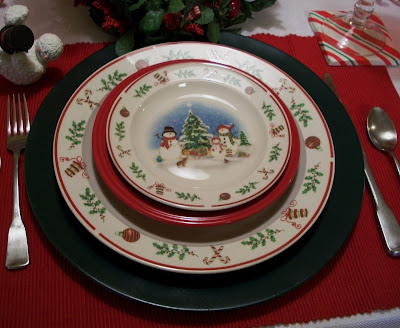 The dinner plate is just a larger version of the dessert plate with a snow family in the middle. 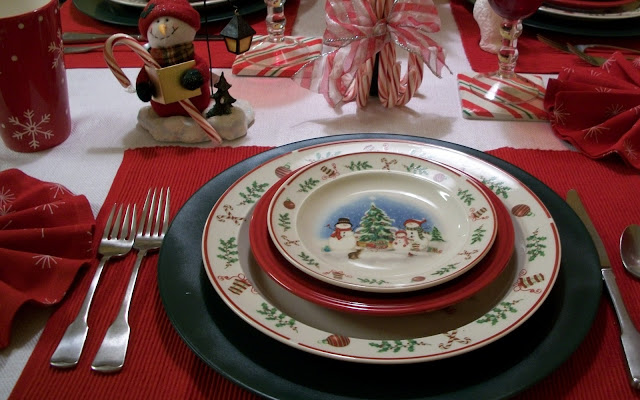 I didn't want the whole table to be snowmen so I took ideas from the rim of the plate.
It has candy canes, ornaments,
and little gifts wrapped in red and green. 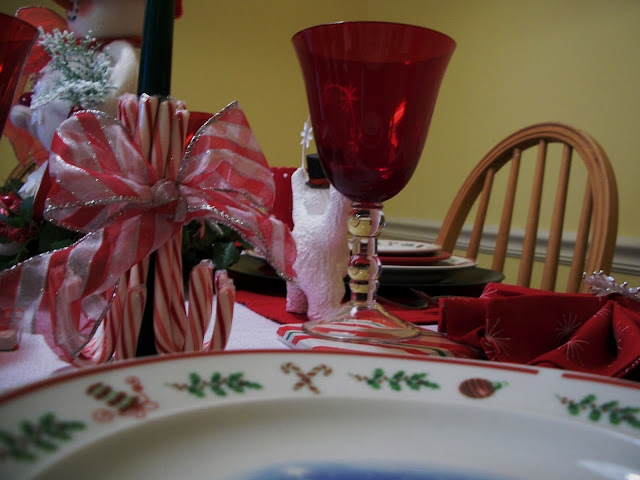 The candlesticks are made
by surrounding a candle with candy canes
and tying with a bow. 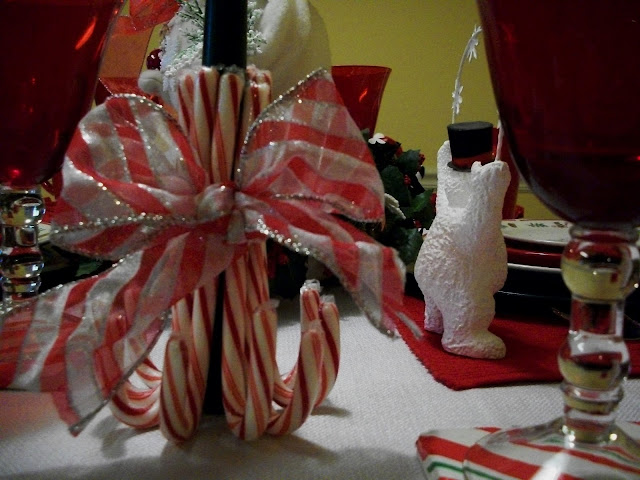 And
I decoupaged the coasters
to mimic the little gifts
of red and green stripes.
I tried several different types of glasses
and finally settled on more of
that red stem ware
that we used last week. 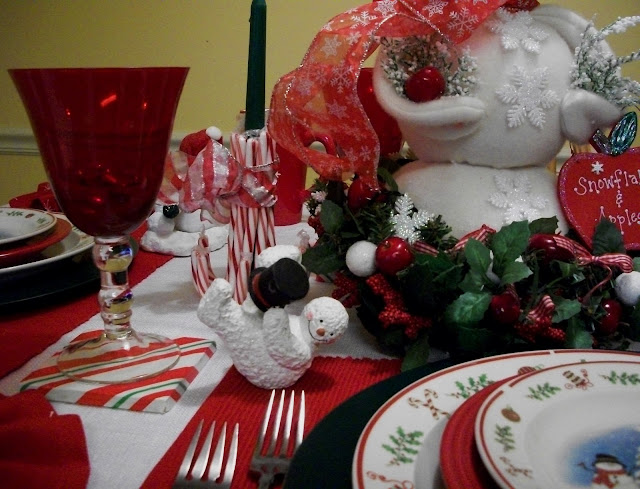 The only new things that I bought
were these red napkins with white snowflakes.
I just  fanned them out with
snowflake napkin rings. 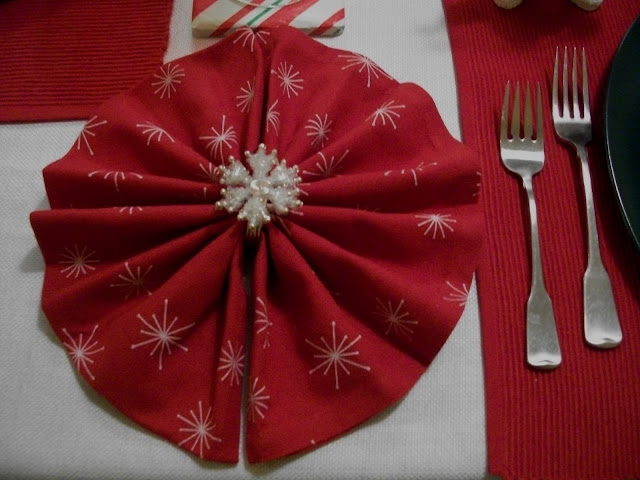 Then, I added these matching mugs
that I  just happened to see at Big Lots. 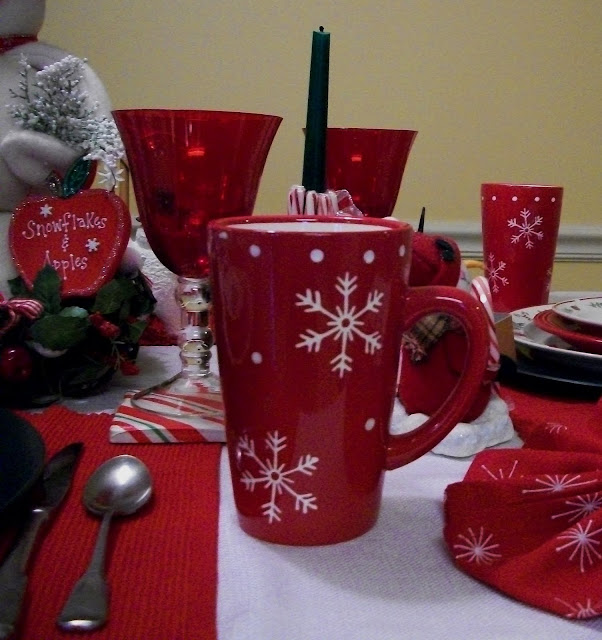 A big puffy snowman is the center piece during the day. 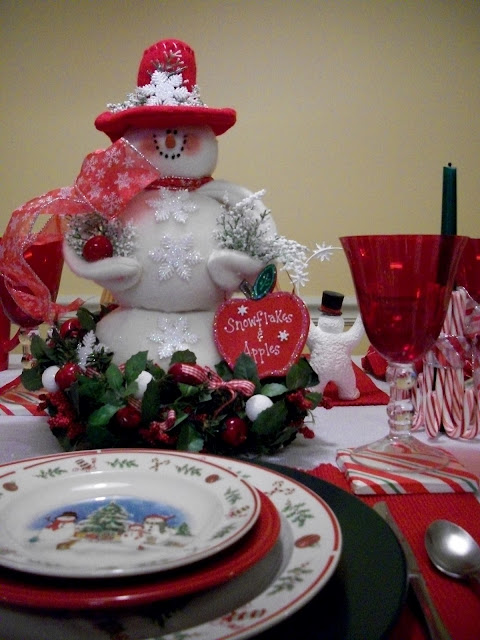 It will be replaced with small poinsettias
when we're eating. 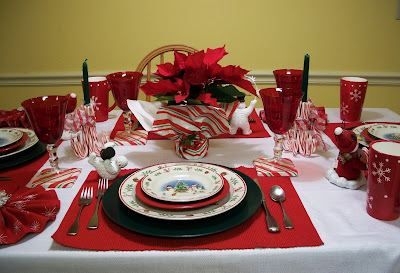 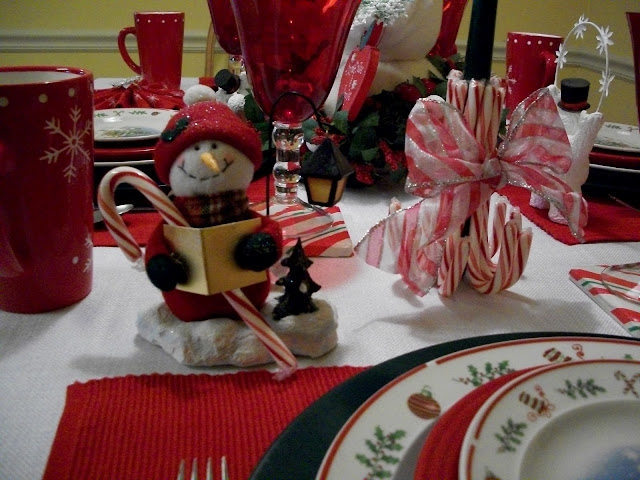 This is the family table.
We all know perfectly well where we're going to sit. 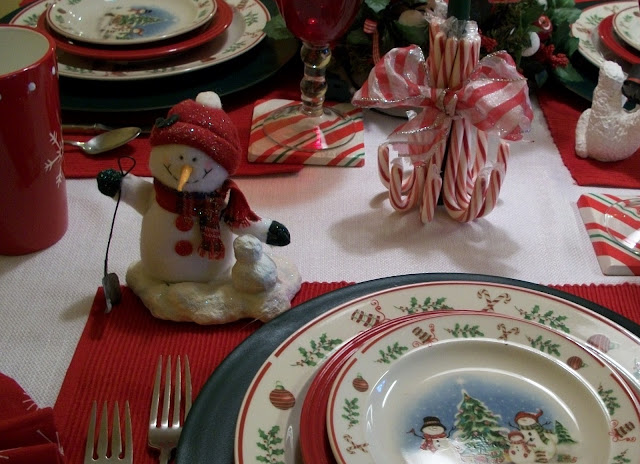 And that's all I have for now.
I'll probably tweak it and change it for the next few days
since I'm home alone. 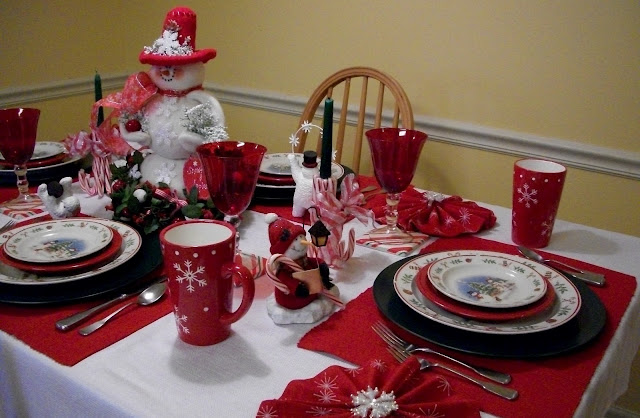 But sooner or later,
I need to move on to the dining room. 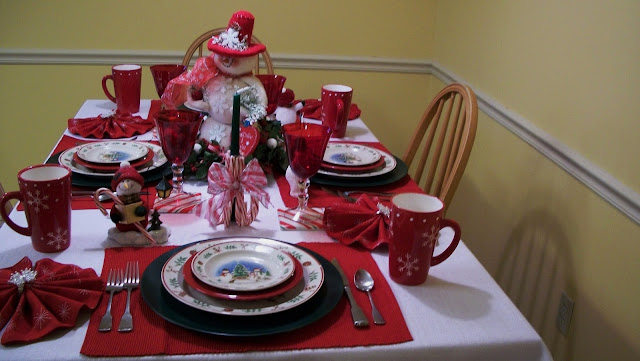 I so wish we lived closer to each other .... I sure could use YOUR help with decor. I absolutely LOVE your snowman table and I never would have thought of buying dishes at the dollar store, but how cute are those?
Now, I want different dishes for every day of the year .... sigh.

So love the vibrant bright beautiful table setting decor. The candy cane candlestick is wonderful for all seasons ... the snowmen are darling.

Super fun table-love it! Your dishes look so cute, and I'm still lovin' the red goblets! My favorite line has to be about the napkins... "just fan them out"! Mine never looked THAT good-lol! Have a great night:@)

This table is just adorable!! So festive and happy. I loved each a every photo. So fun, so happy, so joyful.

What a pretty and happy table. So colorful, festive and inviting. Too bad you're home alone :(
Cindy

I love it! Makes me smile!

what fabulous decorations and I love those mugs...

stopping by from the TT Party

OOh I so want to be a child (or even an adult) at your table. It's so wonderful.. no it's a winter wonderland. I LOVE your tablescape!!

Now I loved your snow man table. You did a great job Debbie.
sandie

A simply adorable tablescape! Love all you did with the table. Your candy cane candle holders are so sweet.

I looooove the snowman table. The candy cane candleholders are PRECIOUS! What a brilliant idea! Love that! I'm cracking up about your "Slobinski Method". I am right there with you. To quote a friend of mine, "It looks like Christmas threw up in my house". There is stuff EVERYWHERE! UGH!

I love your table. Snowmen are one of my favorite thing about Christmas decorating and what's cool is that you can sometimes leave them out even after Christmas is over.

You know how you say you know my style before you even see it, well I knew your table would be fun and jolly even before I saw it. You have such a fun and uplifting spirit and it shows.

Your table is set so beautifully set, Debbie. I think we have a similar setting with snowmen. Our stemware even matches. Love the plates!...Christine

So cheerful and beautiful setting! Love it!

What a wonderful snowman theme tablescape! Love all the details! The candy canes around the candle is a great idea! Nice napkin rings!

DIDAWI (You know what I'm talking about!!)

This was such a whimsical table! It was so cute...

I was thrilled to see the little decoupage coasters - it seems like it's been a LOOONNG time since you've shared anything decoupaged - I've had withdrawals. I've been putting glue on my hands and then peeling it off, just like I did in grade school, to remind me of your decoupage projects. So, Elmer and I both thank you -

Your snowman with the shovel - noticed that there was a little pile of snow next to him. At least at first I thought it was snow - closer look, it was Cool Whip - you little scamp, you. (Or maybe it was some "Kick the Can" ice cream - hard to tell!)

And the candy cane candleholders - just precious. I thought it required 10 candy canes - hey, if the busy Christmas elf has to "sacrifice" one cane for the cause, it's OK by me. (Just try to chomp quietly!)

This invisible person is sitting politely, and waiting for some more Christmas fun...

Will I be invited into the dining room? Or is the kitchen table for the kids? If so, I think I'll stay in here - just sayin'...

Oh I just love, love, love this table!! Love the plates! I love how you used the candy canes to hold the candles--what a great idea! Sorry I have not been around, I just could not get everything together, but I'm going to try harder to not miss so much! You are so sweet to stop by and check on me too:-) We have also been helping with some families in our church, and it has really put "life" in perspective for me.

Such a cute and fun tablescape! I really like those dishes - can't believe you got them at a discount store, they look so special! You are very creative to base the theme of your table around the pattern on the edge of the dishes and a great job you have done! Even if the snowmen at each place setting aren't for placecards, they are so perfect!

How cheerful with all your fluffy friends and candy stripes. Your colors are so pretty and I would never get tired of it all month long!

Too cute! The snowmen/ladies are precious. Love the red glasses and mugs too.

Snowmen are my favorite! The way you wrapped the candy canes around the candles is genius - how fun! I also love those snowflake napkin rings. What a fun and festive table!

I just love your table. And, let me be the first one to say I love the color of your kitchen. I really hadn't thought about it, but you could keep those snowmen up into January. How fun.
All of your colors look absolutely wonderful. So Christmasy!!

Great table little sis. I can't wait to see what you do in your dining room.

How adorable~ your candy cane candlesticks are so clever! Love all your cheery snowmen :-)

Snowmen and candy canes! It doesn't get better than that! I just love what you did with your candlesticks, you clever girl! I loved looking at all your snowmen - such personalities! Great mugs.

Debbie, this is an adorable table! Great attention to detail, down to the snowflake napkins and napkin rings! I know your family enjoys sitting down to such a festive table. Thanks for your comment on MY everyday Christmas dishes -- enjoy yours!

Those candycane candlesticks are so cute! Love all the snowpeople! This is such a fun table.

Oh my goodness, this is just too cute for words. I adore your napkins, glasses gosh I adore it all. Thank you for stopping by and leaving such a sweet comment.
hugs ~lynne~

This is wonderful! I did snowmen too, but you really take the cake! Very creative! Love those dishes too!!!

What a cute table...I love snow people! The candle holders are adorable.

All of your personal touches make this a very special tablescape. The candy cane candleholder is spectacular...so simple, yet so very effective! Love your snowman plates! Thank you for sharing your charming design. Cherry Kay

This is adorable!!!! I love snowmen and yours are so cute. The plates are great. This table would make a peanutbutter sandwich special!

And what time is dinner? Or breakfast?

This is such a festive table, and I love all of your special touches. The candy cane candle holders are soooo cute, and I love all of the little individual snowmen. Love the way you fanned the pretty napkins, and the snowflake holder is perfection in the middle! Your snowman dishes are so cute. As always, when I visit your blog, I love the whole table. laurie

Oh Debbie that is just such a festive and cheerful tablescape. I saw those mugs at Big Lots and was instantly attracted to them. You have great taste my friend.

The snowman are adorable and you made me laugh when you commented about shoveling it in. You are so funny!!

Love the little candle holders made of out candy canes, so creative and cute! I think I've read most of your blog posts over the past few days- love your table scapes and cute sense of humor. Really enjoyed your blogs!