...for moving into a shoe box.
Just some ramblings this Saturday morning as I work on dorm room design for daughter # 2.
1. If your roommate resists all efforts to be contacted before move in day and never actually shows up until the night before classes, it’s a safe bet that you will have to room to yourself every weekend.

2. If you let Dad deal with the tech issues and lift heavy furniture, he will be too occupied to express an opinion about anything else. 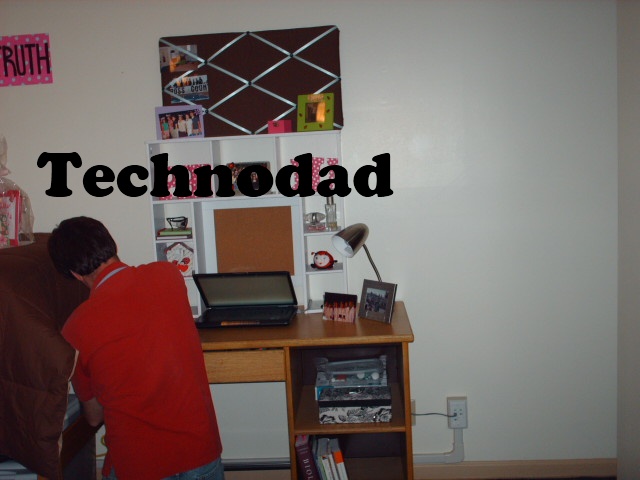 3. If you discover that your roommate’s legal given name is “Princess”, you might end up living in a Barbie Dream House. 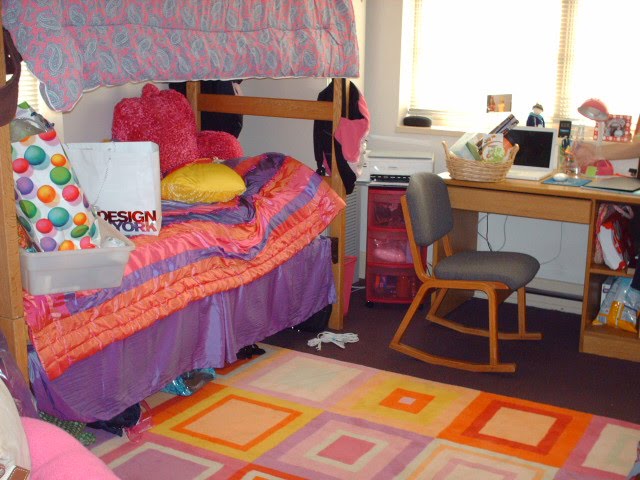 That room belonged to a friend’s daughter… whose single contribution was the comforter on the top bunk.
There was pink and purple tulle at the windows before the day was done.

4. Residence Life will probably recommend 3M strips to hang things on the walls. 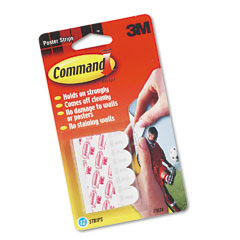 
We learned our lesson about this the freshman year.
Now, before she signs the check- in list, we scrutinize the room and record every smudge.
And since we have that shiny red Kodak,
I take pictures of offending smudges for evidence. 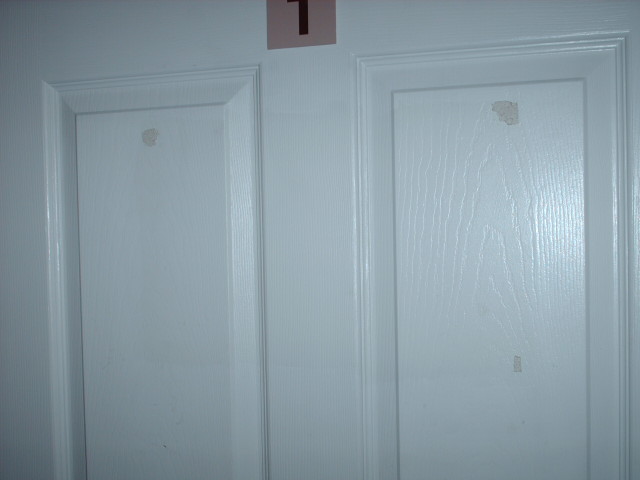 Because you’ll need it.
Miss Check- Out Girl was about to nail us for a smudge violation
in May
until I mentioned that I had taken a picture of it
in August.
I guess they had to make up the damage fee quota another way.
6. Damage fees run about $50.00 per smudge even though you could repaint the entire room for about $25.00.

7. This fact is irrelevant because they neither repaint the room nor repair the damage anyway. They merely record it and charge for it. If your child has a dorm smudge, you might consider framing it. It’s fine art… which will eventually be valued by Residence Life at a price roughly equal to a year’s tuition.

8. If this post is in any way interpreted as a criticism of Mercer University Residence Life… 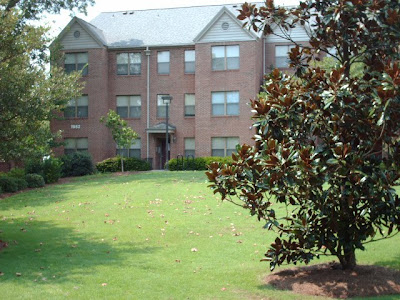 ….then I am an excellent communicator
attempting to use THAT INCREDIBLE POWER  of my blog.
yakked by Debbie on Saturday, July 31, 2010

You are so funny. We'll be doing the dorm move in dance, and what a good idea to snap a few pics of the pre-damages before the post-damage penalties are applied!! Haha.
By the way, you WON my giveaway! Congrats!

Heading over to Southern Inspiration!

Can I have an "Amen sister"! Best of luck with the new room(s), and never underestimate the power of a blog:@)

First--Congrats mother! You have wanted those for a long time :)

Second--Come August 21st those 8 rules will be followed without question to make my room the best ever!

Third--That friend of mine who is also going to Mercer still has not received her Housing letter!

You make me laugh. Love everything you wrote and will take it all to heart and be prepared to use that wisdom in a couple of years. Of couse, I don't want those years to come too soon.

Just read your comment over at Sandie's (Chatty Crone). I am also in Southeast Ga (Bulloch County). Look forward to reading more of your blog.

My goodness! I'm Soooooo glad that those days are over and our kids are on their own now! One day it all either becomes a fond memory or you just block it out! The biggest thrill is the day all the college loans are paid off!!!!

Why do I feel like I have lived the above post?
...Because I have! You tell those people at residence life how we feel!! And don't worry, we'll be taking more pix in two weeks.
Hugs
Sister

Didn't know about the "smudge" factor! Fortunately, my daughter is living at home and driving into Atlanta for her first year. Although she's already said she wants a campus apartment the second year!

I don't have children, so haven't had this experience. I do remember a nightmare roommate experience though. :-) Have to say the comforter on the top bunk is the only thing in that room I would have wanted to live with. Great post! ~ Sarah

Brings back such lovely memories! Ha, ha! Hope all goes well as you prepare for the BIG move in;)

First of all, I saw you won the vinyl giveaway at Suzanne's blog! YEA for you!! I'm totally jealous, but very excited that someone I know won! YEA! Can't wait to see what you do with it!!

Second of all, you are HYSTERICAL and you'll have to remind me of all this advice in about 6 years!

Debbie,
Thanks for stopping by and commenting on my Camp Meeting blog...I've enjoyed your blog so much I've put you into my "Blogs that keep me up late!" LOL! :)

Oh my goodness - I am so glad those days are over. Move in, move out, move in, move out - all those stairs, carrying all their stuff! Tiring thinking about it.

LOL! Well, if the Barbie dream house is pink, I might not mind! LOL! Oh, Debbie... I do not envy you this. Hopefully, all will be well.

The good ol' dorm days! Thanks for the smile!!

You've given me an idea for a new business. I was always the one to do the 'punch list' of damages before my kids moved into a dorm room/ apartment, etc. I was ruthless! I found dings and marks that the landlords had no idea existed, and I documented like a fiend! This is such a funny post. It's gotten my day off to a great start. Thanks for your kind comments on my post. Another neat event that takes place around here is a 'Friendship Luncheon,' put on by a church. Ladies volunteer to create a tablescape...they invite friends to sit at their table & sell or give away the tickets to their tables...and the church puts on a luncheon actually served on the tables that have been set in such a lovely way. It's a HUGE event, and it makes a lot of money for their projects. The caterers actually serve the lunches on glass plates that are set of top of the 'tablescape plate.' Come back and visit my blog soon, please! Cherry Kay

oohhhh...been there done that!! all that moving around...soooo glad that's over. Sending kids off to college was a bittersweet event for me. Every time.
Debbie@houseatthelake

It seems as though you are having a fun time decorating... it's always great to see the end result from the fruits of your labour.