This morning, my next thing was to clean the refrigerator in the garage. If there is one task that I hate more than any in housewife land, it’s cleaning that wasteland of forgotten fuzzy leftovers in that garage refrigerator. It’s so much easier to pretend that I don’t notice the suspicious odor when I need to retrieve something. There are only two things that make me clean out that refrigerator: Either the odor becomes so strong that it penetrates the three inch, insulated barrier sealed with a gasket, or the reason that I did it today.


My mother told me to…

Ok… she didn’t exactly order me to do it. It was more an implied assignment. You see, the only two people in the entire world who call me by my given name are the husband and my mother. The difference is in the syllabication. In contrast to the husband, the mother usually sings out my name with three syllables. Therefore, when she snips it off at two, I know that she is annoyed, and I know that I’m most likely driving too fast, abusing a grandprincess, or hoarding her Polish Tupperware. Yesterday, when I got the “Deb-rah” - with a sigh - as she was standing in front of her cupboard, I knew that what was to follow was the Polish Tupperware lamentation. 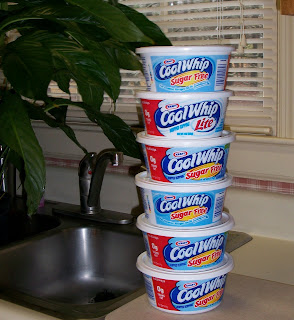 Polish Tupperware is what we call the peculiar collection of Cool Whip containers that Mom uses to send leftovers after Sunday dinner. ~ No offense intended to those of Polish descent, by the way. In my very ethic household, Dad was German, and Mom, English- Italian. Therefore, anything just too oddball for either one to claim kinship was “Polish”. This has caused the family to speculate a time or two that I was truly the love child of some random Polish milkman. ~

It isn’t the thrifty reuse of the Cool Whip containers which lands them on the oddball list. It is the fact that Mom expects us to wash and return the containers to her after we use them. Doesn’t that defeat the purpose of not using actual Tupperware?  Yes, it does.

In my mother’s love language, food is an action verb. When Mom “foods” you, she shows that she loves you. In receiving it, you show that you love her back. She stacks her containers in a neat little Polish tower in her cupboard. When the tower shrinks, she suspects that someone with a two syllable name has disregarded her gift of love.

So that’s why I had to clean that fridge this morning. When I do it, I want to kick myself at the waste of perfectly delicious food that could have and should have been incorporated into my food plan.

This morning I found things like macaroni and cheese, corn chowder, and brown rice. I even found this  peeking out from behind a Polish tower... 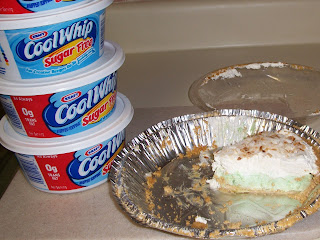 It’s my daughter’s favorite pie. And it’s sugar free. And yes, it was already green when it went in there. However, I did find some black olives which I’m almost positive were green when they went in there too.

So then I had a sink full of containers which I had to scrub by hand before I sanitized them in the dishwasher. 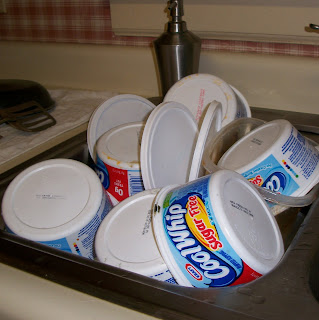 All the while, I thought of the people of Haiti and the African Mission that I support and how very grateful they would be for that food. And I thought about my round Italian mother and her Polish gift of love. And I thanked God for his blessings and committed myself to be much more appreciative of them.
yakked by Debbie on Thursday, January 21, 2010

labels: family, home, the next thing

I so loved this one. Aside from the serious comment about Haiti (and I agree and share the same feeling), the picture of your sink filled with Polish Tupperware had me roaring. Thing is, I'll never view Cool Whip containers the same again. Thanks for giving me such a good laugh on this rainy day!

Oh, my mother's in this post, too. And would you believe it skipped a generation and now my children are in this post?