As I was packing up a box of books which reside on the list to return to their rightful owner, I came upon this one. 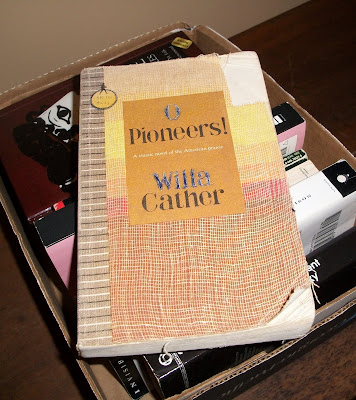 And I smiled. I smiled not so much at the novel itself (a good one) but at the memory that the title of it evoked to Little Debbie. That memory meandered all the way to this morning's contemplation.

When I was little, we loved to explore the woods surrounding our neighborhood. That was long before neighborhoods were developed into subdivisions and we had shows like Criminal Minds which took the fun out of the forest and put the boogey man smack dab in the middle of it. It never occurred to us (or apparently our mothers) that carefree summer days and long explores could be dangerous things.

How we loved school vacation! We frittered away the days playing in the sunshine of our imaginations. Our very favorite game was pioneer family. We roamed the neighborhood, wearing prairie skirts and poke bonnets, scouring the ground for potato sized stones to plant (and then dig up) in our make believe gardens.

We pilfered our houses for props for our little prairie paradise. I remember dumping a flower arrangement out of a perfectly shaped basket belonging to the Duchess because I liked the way that it dangled from the crook of my arm. (Come to think of it, it’s the same basket which lives in my mind’s eye in this little fantasy.)

The Duchess never complained. She merely demanded that the props be returned to the 20th century whenever we did. To this day, she laughs about the time she caught us lugging some stone lawn chickens which had belonged to her grandmother across the prairie. We explained that we needed laying hens on the homestead... and then we headed out to find oval egg stones for those hens to lay.

Sometimes, we co opted historical figures. My brother always wanted to be Daniel Boone; another boy was Davy Crockett. Imagine our surprise when we learned years later that the two men were not contemporaries at all. All we knew was that they each wore coonskin hats, carried rifles, fought the “injuns”, and wrestled the “barrs”.

(Because we  spoke fluent Davy Crockett on our prairie. The mud puddle was “yonder crick”; the swamp which lead to the river, “the big slough”.)

Our bicycles were our horses, and we rode those nags for miles… wearing those coonskin hats and poke bonnets. Once we tried to hitch the bicycle horses to a wooden wagon. The poke bonnets sat in the wagon, and the coon skins drove the team. I think we pioneered about ten feet before the boys determined that we were ready to stake a claim…

We would keep this game, or a variation of it, going for the entire summer, rising early and gulping down our breakfasts so that we could meet the other settlers for a day of pioneering.Sometimes we packed a picnic lunch and spent the entire day on a great exploration.

We were adults before we told the Duchess that our favorite picnic spot was across a foot bridge to rocky wall of the local waterfall. 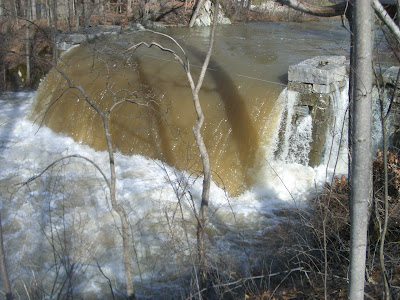 We got the two syllable scolding two decades too late.
Now, I admit that what I recollect as carefree childhood days might really qualify as careless ones. We roamed in the forest, played by the swamp, waded across the river, and picnicked by the rushing water. By the grace of God alone, we all made it to adulthood.

But this is what I’m pondering this morning: While my girls have childhood memories of their own poke bonnet days, I can’t help but wonder if maybe… just maybe… I erred too much on the side of caution.

Because I always tended to keep my princesses secured a little too safely behind the castle walls.
I still do…

I don’t know that many kids today enjoy the freedom of riding the two wheeled steed on the great exploration. And even if they try, the poke bonnet won’t fit under the bike helmet, and the prairie skirt would get tangled in the knee pads. Because we seem to be a culture obsessed with protection.

Maybe our children are victims of the imagination cultivated all those years ago on the prairie. It seems that way because I could always imagine the worst possible scenario whenever mine tried to pioneer west. Did the Duchess lack imagination, or did I lack trust? I honestly don’t know.

Somewhere is the happy medium between bike helmet and water falls. I just wish that I could figure out exactly where it lies.
yakked by Debbie on Thursday, March 18, 2010

Thanks for bringing back a flood of memories of playing the same wonderful games, and spending countless hours in the woods and fields establishing my own pioneer dreams! And yes I do think we are a world obsessed with safety and needless worry thanks to too much news media that works us all into a scared frenzy. I kept, and still do keep, my chicks under a watchful eye! Too bad really, no wonder we have so many couch potato children these days!

I was a child of the late 50's and we spent our days trying to think of ways to fly. Jumping off fences, hills and anything that appeared to give us the much needed lift. Of course that all stopped when one of our friends broke his arm and nose from one of our experimental flights and we had to explain how it happened.

Oh well, maybe that is why I have a fear of flying,

Thanks for making me smile and bringing back those great childhood memories.

I'm the helicopter mom. I totally admit it, and I do feel like I'm depriving my kids of some of those memories I made when I was little. My mom had an early dose of it though, and she kept me within the confines of our very-suburban neighborhood block. I wasn't allowed to cross the street without asking until I was 10. I hear the things Sam and his siblings did when they were growing up and wonder how they, too, lived to tell about it.

I think the world *is* different now. And maybe it's jaded of me, but I feel like if I keep a tighter reign on my kids, they won't be subject to "those other kids" and their "worldly ways" too soon. For me, it's as much or more about *that* than safety.

I smiled to think about it because I frequently have moments where I wonder "What would Laura Ingalls do?"...I'll probably blog about it someday. Stay tuned. ;)

Just for the record, I always get a little big excited when I see that you've posted. Hope you have a blessed weekend!

I had to visit this post from your Tablescape one today, because my sister and I used to play Pioneers, too! We tended to be Mary and Laura from Little House on the Prairie, and we had to pretend our pixie haircuts were really long braids. We also played outside ALL DAY. I think Mama told us, "Don't come back inside until lunch time!" Great memories!