The Curse of Lorenzo Dow

In the early 1800s, Jacksonboro (Jacksonborough) was a promising little town and county seat in rural southeast Georgia. Today, nothing remains of the place at all except one old tree lined lane…

And one single house. 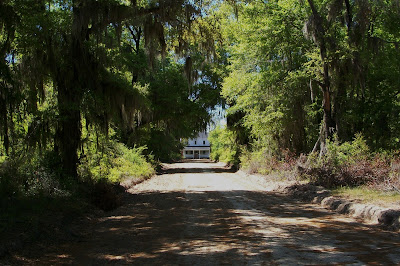 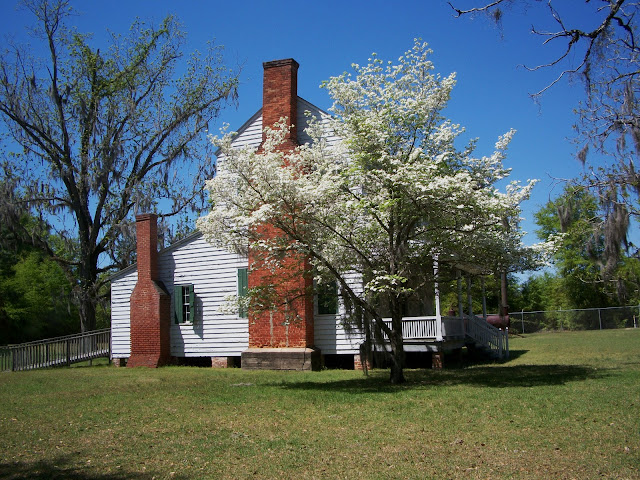 It was the home of Seaborn Goodall.
He built the home in 1815. 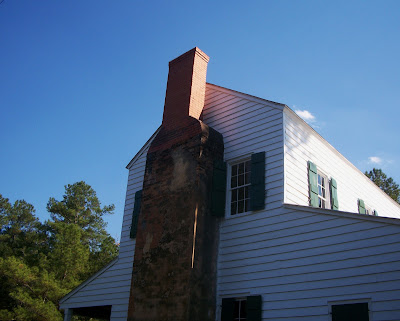 It stands as the lone survivor of a town which fell,
according to local lore,
to the curse of Lorenzo Dow
Lorenzo Dow was a fiery Methodist minister.  He lived the life of the itinerant preacher, saving lost souls up and down the eastern seaboard. 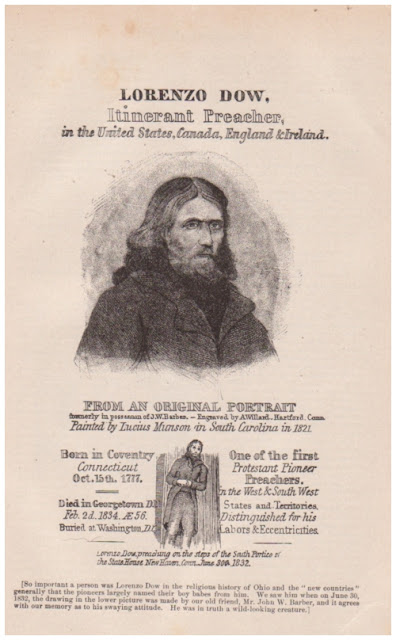 Around 1820, he traveled through Jacksonboro,
but he stayed there less than one day.
You see, while Jacksonboro was a promising settlement, it bore more resemblance to a lawless frontier town of the Wild West than a quaint God- fearing village. There are no records of an established church, but the faithful met in the local meeting house. There were, however, established saloons. “They” say that there were as many saloons as other businesses combined.


Into this setting came Lorenzo Dow.
Now, by this time, his fame was well known in Georgia. He had ignited crowds of thousands…


…which ignited
an entirely different fire
in the Jacksonboro underbelly
if you know what I mean...
While he prepared the meeting house, local saloon owners tanked up the town rowdies for an evening of mischief. As the story goes, Dow had barely stood to speak when the place was surrounded by drunkards shooting off pistols and hurling rocks through the windows. They closed the shutters, but the noise from the outside finally succeeded in closing the service as well.


The faithful returned to their homes,
and the rowdies returned to the saloons…
…followed by Lorenzo Dow.
Did I mention that he was a fiery old fellow?
He barged into a saloon and broke open and overturned barrels of whiskey. The rowdies reacted just as you might suspect. He would likely have been lynched had Seaborn Goodall not followed Dow to the saloon as well.


Goodall stood up to the rowdies,
broke up the crowd,
and brought Dow to his home 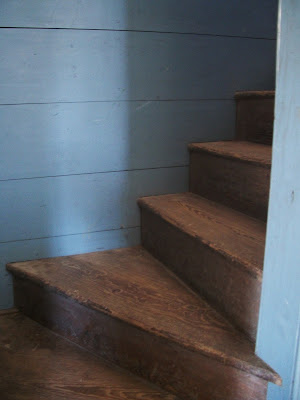 to nurse his wounds
and keep him safe for the night. 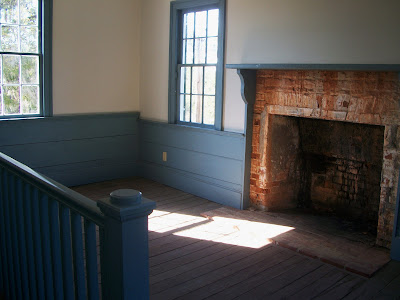 Dow tried to leave the town peacefully the next morning, but he was roughed up by a bunch of hooligans with hangovers along the way. They finally let him go, but they chased him out of town pelting him with rotten eggs and produce as he went.


On the bridge at the town’s edge,
Dow stopped.
And  as the story goes,
he shook the dust of the town
from his feet,
raised his hands toward Heaven,
and called a curse
on the town of Jacksonboro
but
a blessing
on the home of Seaborn Goodall. 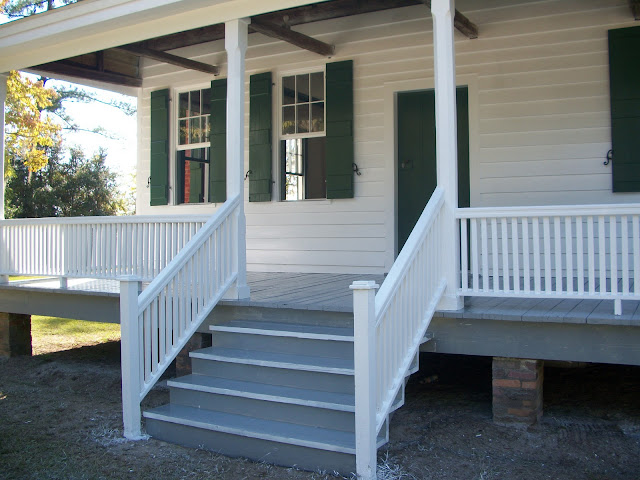 Well, over the next twenty years, one natural disaster after another claimed the buildings of the little town. People began to move away, and the town began to crumble. The final nail in the coffin came in the form of a railroad which was routed not through Jacksonboro, but six miles south in another quiet Georgia town. That little town became the county seat and my hometown.

By 1847, Jacksonboro was a desolate piece of landscape, barely reaching the status of ghost town. 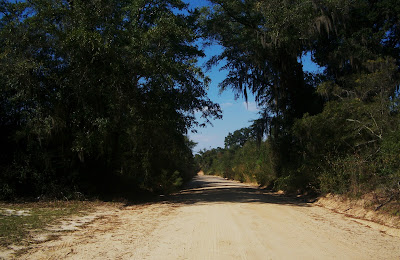 All except that one old house.
Years ago, it was given to my chapter of the DAR to restore and preserve. 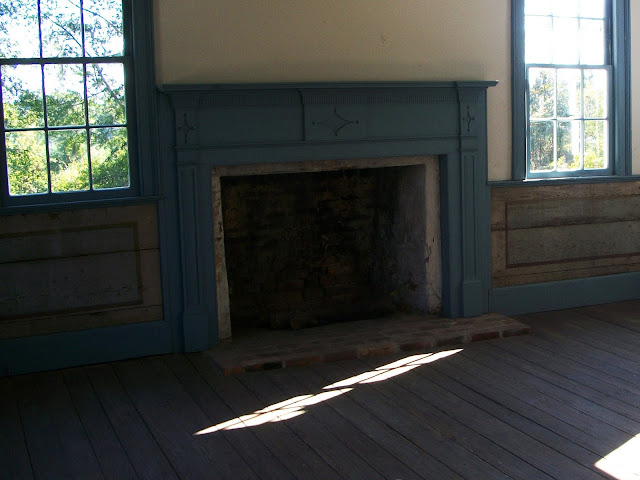 I’ll yak all about her restoration
and the facelift that she’s getting this year
another time. 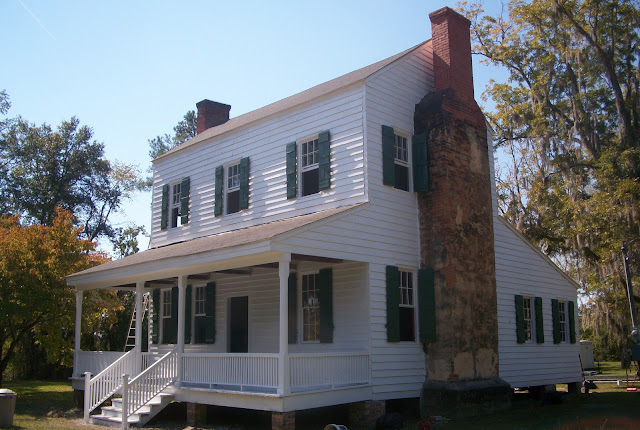 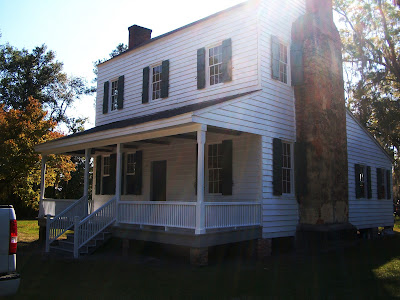 Debbie - This story was fascinating! I really got caught up in it. I love stories like that from the past. It's one of the reasons I think "The Hub" and I love exploring the "west" - ghost towns, old cemeteries, old mining towns - history is so very interesting. Those traveling preachers were a different sort, weren't they? But I have no doubt that God used them mightily. We could all learn a lesson from them, probably, about being a little more outspoken, eh?! Great verse at the end...
(p.s. Sent you an email on the weekend...No worries, know you're busy right now. Just wondering if it got through.)

How interesting! As a history buff, I love such stories. What a lovely home to continue to stand. Once the renovation is complete, you must share pictures again!

The Charm of Home said...

That was a wonderful story. Love that old house and it's history. How neat. Thanks for sharing.
Sherry

Loved this so much!

What a wonderful Georgia tale...thanks for sharing it.

Now let's get down to business. I will supply the recipes and pictures for a cookbook if you will do the writing! That's what I think WE should do! Hugs from Idaho...

Debbie,
Love the story of Jacksonboro and the "curse!" These old stories persist no matter what else is said of them. Just like our "Jersey Devil" stories about the birth of a child so deformed and ugly he must have been "spawn of the devil!" Superstition reigned supreme and these stories were told in front of steaming, snapping fires from evening to evening for years on end. Looking forward to seeing pictures of the restoration of the old house.

Love, no ADORE, this story. I really like the focus on the house that stood...built upon a ROCK that one was.
Love to you!
Elizabeth

Debbie!!! I loved, loved, loved reading this! I'll say it again that you are such a gifted writer and story-teller. I see a book in your future! :-) What a wonderful piece of history to be apart of and I cannot wait to see more of the restoration and hear more about this lovely historical home. We studied Isaiah today in Bible study and how he went forth with God's commission KNOWING no one would believe him and the courage it takes to do that...just like Dow did! I pray I can have that kind of courage in my own life!
Vanessa

I love the story about Jacksonboro. What a beautiful old house. I love touring old houses. I can't wait to see the facelift.

I love this story!! It's fascinating and amazing.

Debbie, that is a very interesting story!!! And that is a gorgeous old house. I LOVE old houses...so many stories to tell. I mean, if the walls of old homes could talk, we would hear some mighty amazing things, wouldn't we?

Great story, Miss Debbie. I have to admit, I would not want to be on the cursing side of good Mr. Dow after seeing that picture!!!!
xo
lynn

This was fascinating and I live in GA and have never heard of it. Or the city itself? Where is it?

I love this ... absolutely amazing!

I love to think about the history of a home by listening to the sounds of the floorboards. Old homes have wonderful squeaking floors they always make me smile. I imagine this house with those amazing sounds.

Thanks for taking care of this historical home.

You know I've heard the story many times and I still enjoy hearing again. As we were cleaning in there the other day, I kept thinking about what had happened in each the the places I was working. Just love this old house and wish more people were like you and chose to see the blessing not the curse. Hugs to my fabulous story telling sister!

Now that was quite a story!

Debbie, I just love this so much! It really speaks to my history-loving soul. So neat that you will be able to be part of the restoration too. I agree with Vanessa about seeing a book in your future. I have wanted to tell you many times that you should pick out your favorite blog posts and sell them as a book. I'll pre-order!

I live in the south and I have never heard of Jacksonboro! I can't wait to hear about the restoration

Oh, Debbie. I love your yakking! Wokking, whatever you call it, it's wonderful!
I also love this story. I thought the same thing as you, about the Blessing.
Great story.

great story and something to ponder....it's the Word. :)

Debbie, thanks for posing some great photos and a very interesting history lesson about Jacksonboro :-)

That is an incredible and interesting story!! You have such a way of telling things anyway:-) I bet you can feel all the history when you are in the house too.

What a great story Debbie, and as always, you did a wonderful job of telling it. If anything should have been left standing, it was this house. It is wonderful. I'll look forward to learning about the restoration. laurie

Thanks for sharing this story...next time I drive thru that way I will look for the house.
(())

Neat story! And yes, he blessed that house, and it prospered. I do, think, that our words one day are going to be measured, and I fear what I've said in my life that will not be good in God's eyes. Thank goodness for the mercy of the Lord!

That is a neat, neat house!

Aww Debbie! That was a great story to read this Sunday morn. I love how you tied a few familiar verses as well. I think it's also an interesting look into the history of society as well. Fascinating!