Just a little update from the
breakfast for two that I yakked about
on Tablescape Thursday...
in case anyone is sitting on the edge of her seat waiting…

Anyone? Anyone?
I didn’t think so, but here’s the update anyway.
The husband arrived home late Friday afternoon and headed upstairs to unpack his bags as usual. I chirped along behind him as usual.  He spotted the table immediately. Why, he even complimented it. 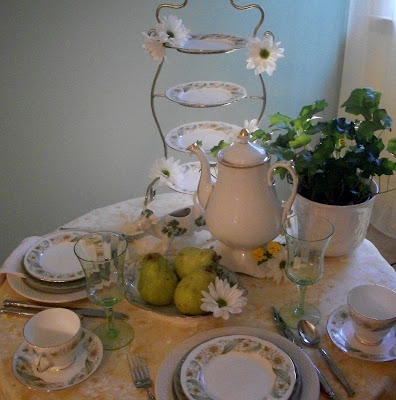 Is that for your tablescape?
(Because, you see, I yak all about the tablescapes…)
I said that it was, but then I continued that
actually, it was for us.
He shook his head,
and I saw that smirk begin to appear on his face…
which is why I didn’t look at his face
as I launched in to an explanation
of the Great Breakfast Adventure…
which is why I failed to notice him
whip out his bottle
of Snickering Testosterone
before he  proceeded to sprinkle
all over my breakfast table.


Apparently this is not a man's coffee cup. 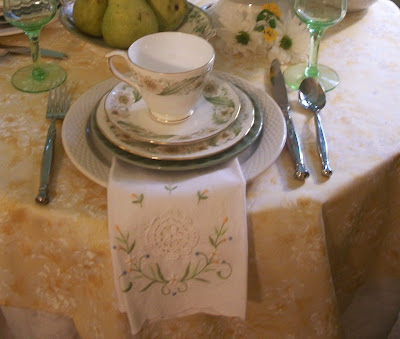 According to him, it is a tea cup.  Mr. Coffee also informed me that no man after the 19th century wanted to use a cup of  that size first thing in the morning.  He wasn’t sure, he opined, that they could get their fingers through the holder if they wanted to. He tried though, holding the girly teacup with pinky perched in the air.
Such a smarty pants I married.

I was seriously close to sticking a pear in his mouth, but I chose instead to act a little wounded, and although he knew that I was being a big fat faker, he agreed to meet me for breakfast and leave the snickering testosterone behind.

I knew he would.

But I made a few changes in the name of marital compromise.  I replaced the dainty tea cups with some simple white coffee mugs. 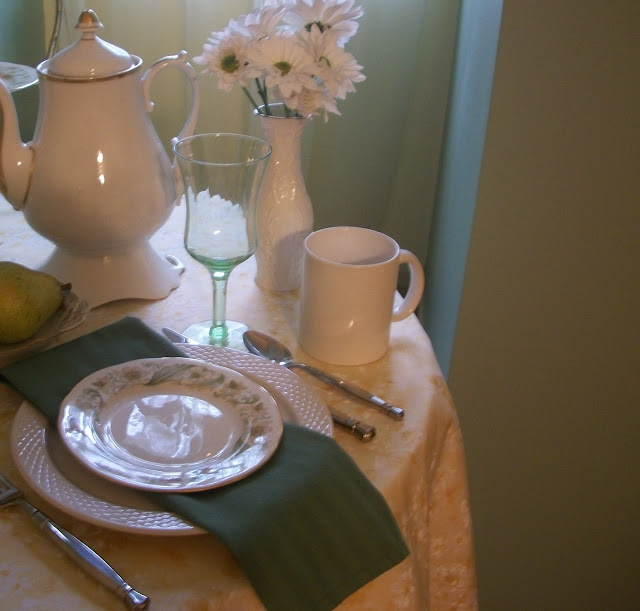 And while I was at it, I replaced the embroidered linens with some simple green cotton ones. I removed the plant to give a little more room to the bull in the china shop and replaced it with a small vase of daisies. Then I moved his big old man chair over to the table so that he could smirk in comfort.

And we enjoyed our breakfast. 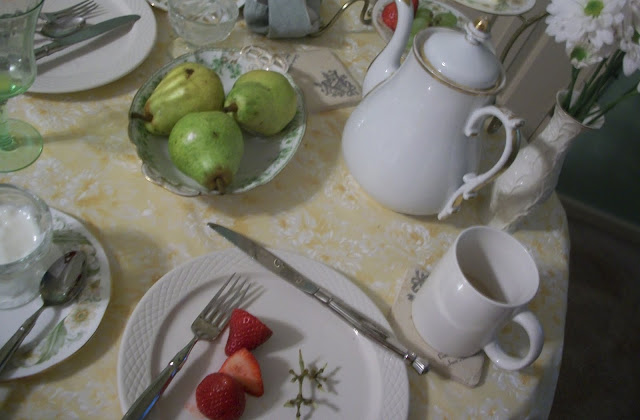 I took that shot after the fact. You just don't bring a shiny red Kodak to a romantic breakfast for two, people…

He talked about his week and his visit with the girls and Miss Whimsy’s affection toward him right in front of her new friends. I talked about nothing at all, and he listened.
As usual.


He even said that he would like to do it again.
So there you have it.
I dub The Great Breakfast Adventure
a smashing success.
Now, I’m thinking about,
a  candlelight dinner in the garden.
Too bad I don't have a garden...
yakked by Debbie on Saturday, August 28, 2010

labels: the man of the house

Well, I wanted to know!! I am laughing, though! My husband gets the teeny tiny Franciscan Ivy cup and saucer at breakfast, but then I see him get a mug after breakfast, so I did the same as you. I bought some big Ivy mugs and he loves them. They are too cute, aren't they? I love this setting just as much! Beautiful!!

I WAS on the edge of my seat waiting! :-) I absolutely love how you unfold a story and I also love how you thoughtfully changed out the table setting to fit the "guest". That's true hospitality right there! Thanks for sharing this with us!
Vanessa
http://southerninmyheart.blogspot.com

I added myself to follow your blog. You are more than welcome to visit mine and become a follower if you want to.

Who needs a silly garden anyway? I love your imagination and improvisation ... can't wait to see what else you've got up your sleeve!

You are hysterical!! I love to check in on you and your world! I know I'll leave with a happy feeling. Can't wait to see what you'll say or do next-LOL! I'm sure the husband enjoyed reconnecting with his bride!!

I had a great laugh! I really want to share it with my husband. He thinks this blogging world is a little strange, even though he has visited mine and let a comment from anonymous(sp). The main thing you had quality time together!

Now that looks like the perfect compromise for a perfect breakfast for two. Hope it was heavenly.

Please do not tell my husband where to buy Snickering Testosterone. I have a hard enough time with him using Macho Chuckles.

By the way, I'm really impressed with your self-control on the whole "pear in the mouth" idea. Sometimes just doing things like that ON THE INSIDE is enough, right?!

Glad it all worked out, and that you had a nice breakfast.

Oh so sweet! I knew he'd smirk but I also knew he'd go along with the whole sweet idea because he's wholly sweet on YOU!

Great post and good for you for making some changes to make hubby more comfortable :)

LOL! Loved the breakfast account, and love how you were flexible in that tablescape, making sure your man had his mug-of-choice. Such a good wife thou art. Now for that garden dinner... you'd be surprised what you can do with a bit of imagination out there. ;)

Well I guess you didn't have to stick a pear in his mouth. lol sandie

Now that was a romantic breakfast for sure. and I bet you'll come up with something just as wonderful for that candlelight dinner, garden or no.

You are too funny! I really like your table and the compromise! Sounds like you had a great time...love the pears! ha!
Thanks too for dropping by to visit my last post on bookshelves. I'll post pictures as soon as things calm down a little.
Sharlotte
Ms. Sharlotte's...Southern Reflections

HOW SWEEEEET! My Hubby would've snickered at me too, but would've done it anyway. What a wonderful romantic way to start the day.

The candlelight dinner in the garden sounds FABULOUS!!!!

You knew I was waiting for this post, too!!! {from our e-m's!} What a great writer you are!
You had me laughing, starting with the "Smirk"!!
It's something I joke about w/my dear hubby, too.... Although I call his "that smart-a** smirk"... I'm gonna shorten it to just "that smirk" like you have, ...sounds a little nicer! Thanx again, for another wonderful post!
BTW: I commented on my blog, back to you about the walnuts!! And I look forward to hearing when you find your angel with the broken wing!

You are a total talent when sharing your weekly adventures. Please know how much I enjoy them and when I'm having a "belly-laugh" in the privacy of my project room, my guy comes in to see, "What's so funny?" He too has read a few of your last posts and now asks, "What's Debbie up to?" You get an A+ from me for bringing romance into a great relationship and his pinkie may be in the air, but he's loving it!

PS I did dream up that syrup, "just in my head", like you dream up how to word these fabulous escapades!

Oh Debbie, I'm so glad I clicked back to read this post! I am laughing - hee hawing - almost in tears laughing! You are hysterical! Love your sense of humor and love the way you write! Great post about the great success of the breakfast adventure! laurie