It was hot and humid on Saturday
when we moved our freshman into her dorm room.
One of the best things about Mercer, though,
is that freshmen are moved by the trusty
Mercer Movers,
orange clad upper classman and even professors who do all of the lifting.
(photo from the Mercer website) 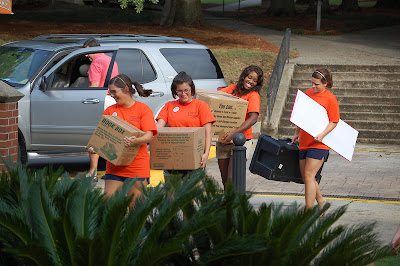 That's a good thing
since she was near the end of the hall...
on the third floor...
with no elevator...
We still packed lightly.
After all, what goes up must eventually come down.
*Somehow*
big sister managed to be on our team of movers.
It might have had something to do with the
17 text messages sent back and forth
giving estimated time of arrival...
Or perhaps it was that demonstrative arm flagging when we turned down the street...
Or maybe just luck. You be the judge.
Here's the room when we opened the door. 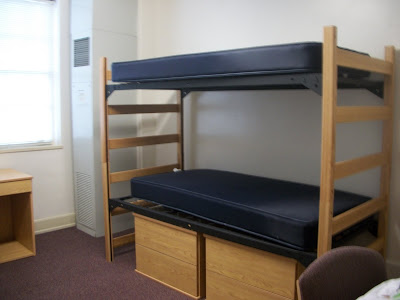 Yep.
Just about as tiny as we expected.
Perhaps even more so.
Apparently, the dressers have been victims
of downsizing.
They used to have three drawers.
Now, they have two. 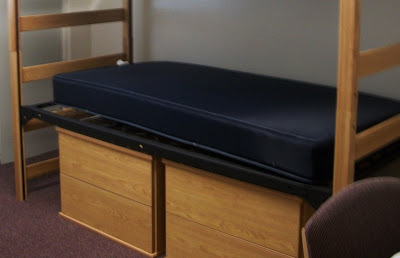 The first thing we did was unbunk the beds.
Tiny as the room might be, they still wanted their own spaces.
Then, she started tossing things underneath the bed
to see how high she was going to have to lift it. 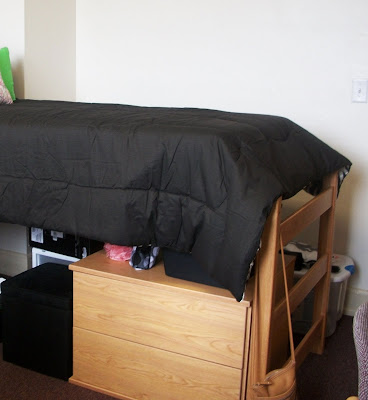 Actually, not too high
due to the dinky downsized dorm dresser.

So she made her bed. 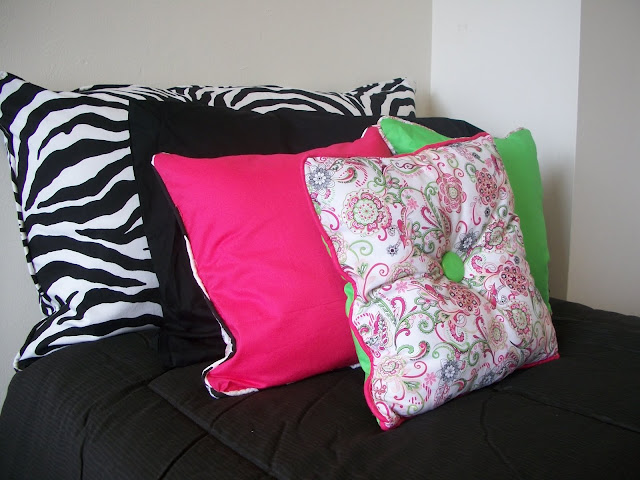 The comforter is reversible with zebra on the other side.
If she gets a notion, she can whip it over,
and turn all the pillows to the solid side for a whole different look. 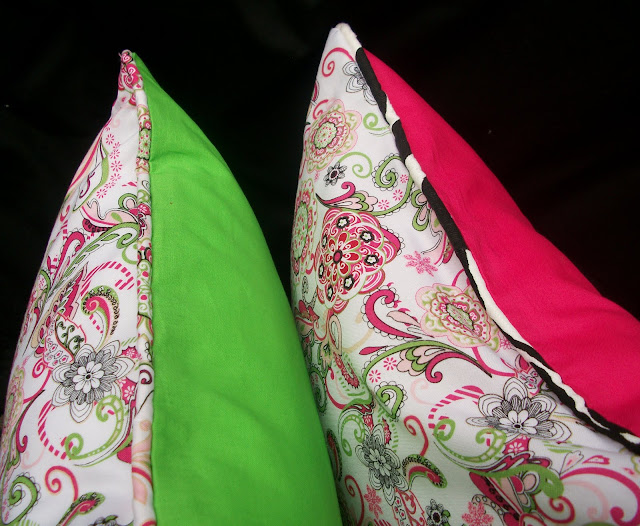 (I'm actually a lot more jazzed about that than she is. Sometimes my girls just go with my flow...)

Can you see that annoying little jut out beside the bed? 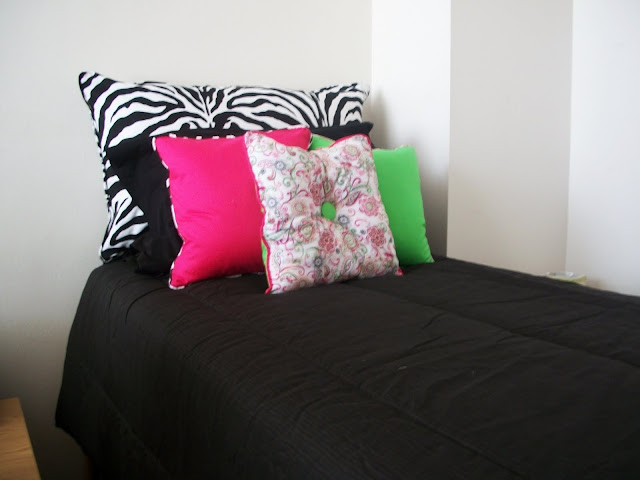 It kept us from being able to put the beds in a "L" shape
which really irritated her  us  me.

She just put her tall skinny cubbies there.

The lamp was a graduation gift.
It was amazing how many gifts she got for her room which matched. 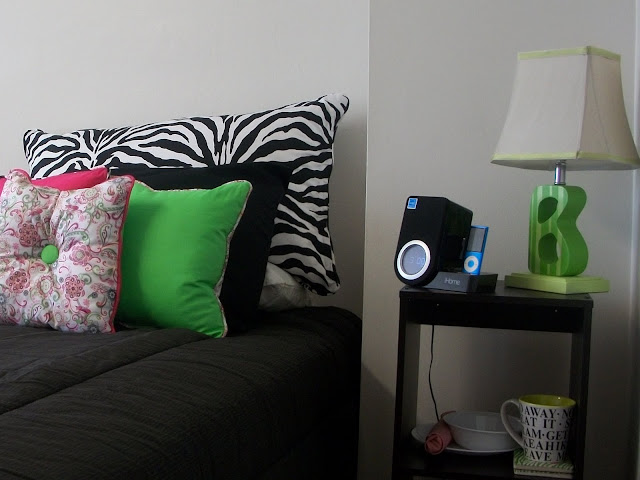 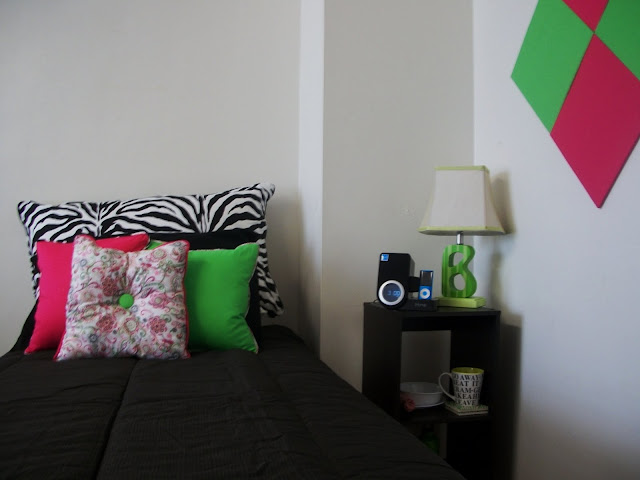 She set her desk up on the wall opposite her bed 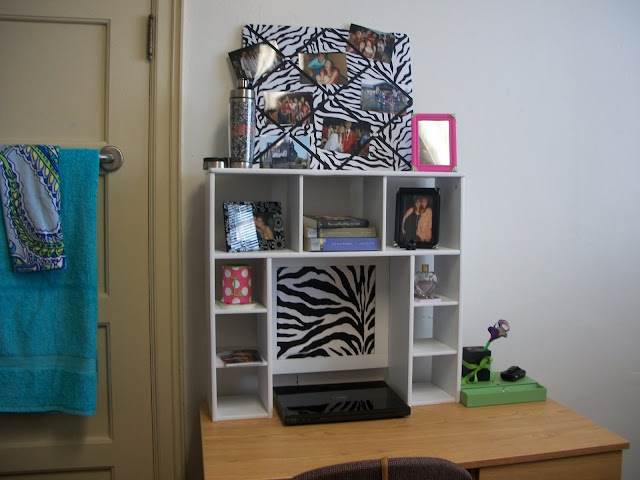 It sits between their closets and the bathroom 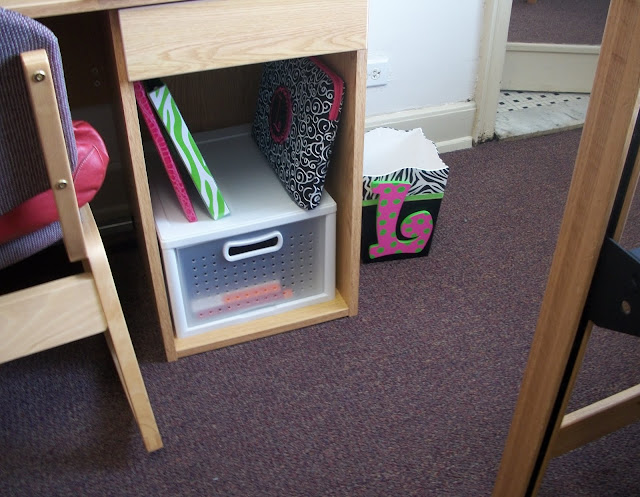 Adding yet more wall color.
And even a picture of the family. 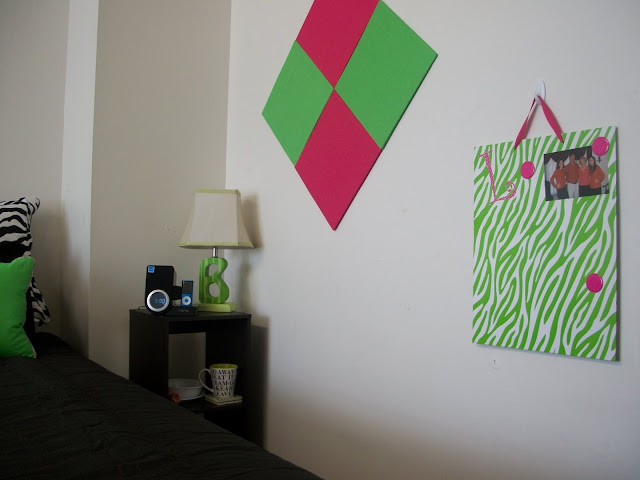 This shot shows just how close are the quarters. 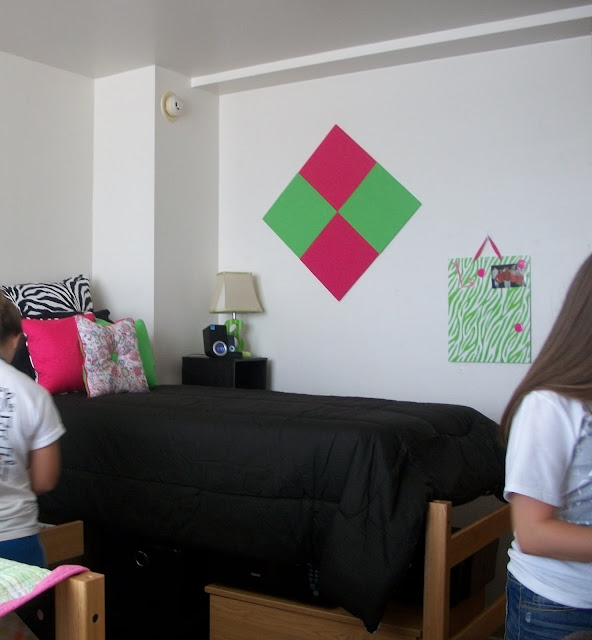 That's their microwave resting on top
of her downsized dresser
under the bed.
She also has several black storage bins.
Fortunately, it all sort of disappears into blackness.

Here's the view from the other side. 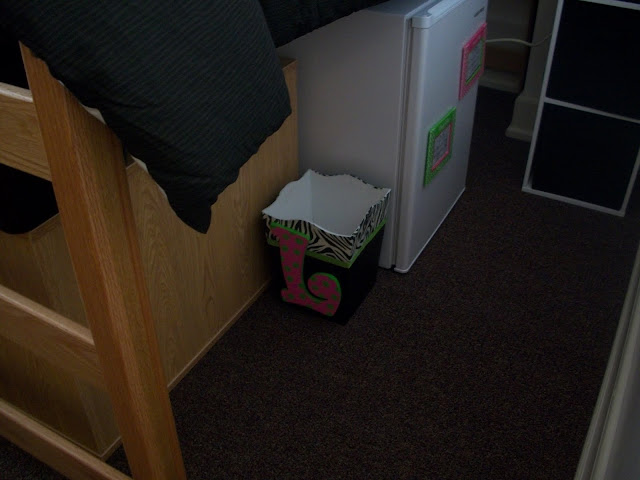 The cubbie nightstand has canvas drawers in the bottom.
She's going to keep edible stuff in there.
since the refrigerator opens to that side.
Finishing touches... 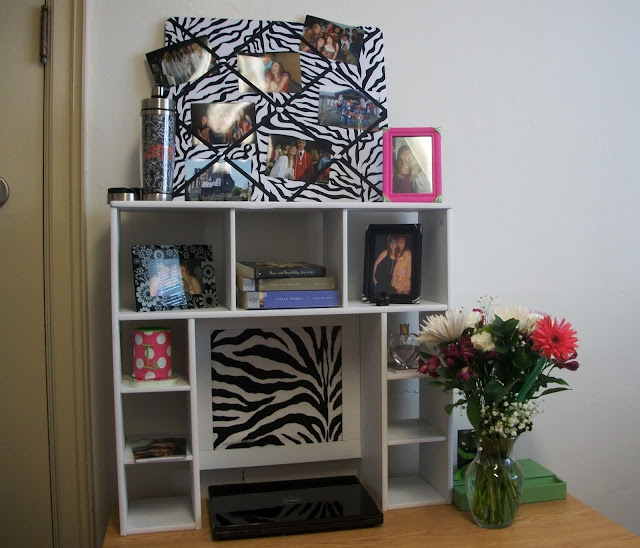 Some flowers, just because... 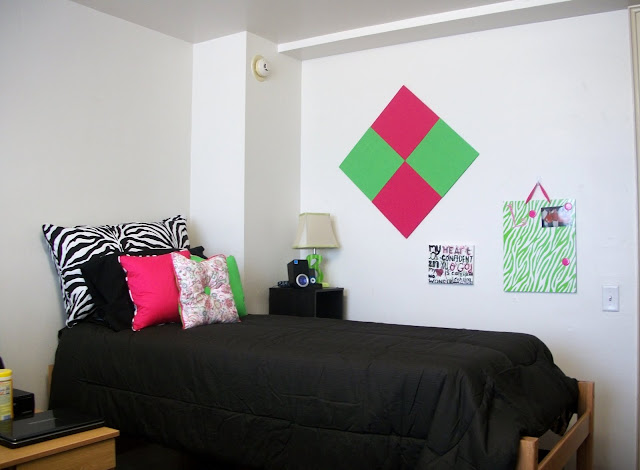 And a canvas covered with her favorite scripture.
It was made by a younger girl in her youth group.


So there you have it. All moved in with her pink and green and zebra.  There is still a lot of blank space, but there will be plenty of time to fill it up.  I will add one update  for those who have been following the story: The roommate assignment was modified. She is not rooming with the bear hunter after all.
I'm pretty sure the zebras were relieved to hear it.
yakked by Debbie on Tuesday, August 24, 2010

How fun! My DD commuted to college from home so we never had this lovely experience. LOL

What a fun room, I'm sure she'll be very cozy there!

Very cute. It looks just like you described it. Let's remember to take some pictures when we arrive in the spring to bring her home. We know she'll have at least one drawer full of t-shirts, so the stuff in one current drawer has to go somewhere. And how they accumulate all of that other "stuff" is beyond me.

You did a great job mom! Thanks for sharing it with us.

Our weekend was much the same.....except it all went so fast, I took fewer pics. The roommate is nice, although an engineer type and I hope she can put up with my daughters...um, spontaneity!! :D
Great job on the room; it looks great.

This is so sweet! I think her room looks awesome. How far is her school away from home?
Way to go, mom!
Alicia

High five to whomever thought of having the helper movers, that was really great.

The room looks wonderful, the colors and style sure made things look jazzy. I can understand why that odd wall made for a challenge. I'd be very miffed about it too.

All in all I would say you did a great job, now the rest is up to her - study hard and soar!!

Her room looks fit for adventure! Thanks for being such a good mom. I think the cubby turned out perfectly for her lamp.

Could the room be any cuter??!!
I have some questions.
My Sarah was asking for some sort of hutch thingie for her desk-where did you find your girl's?
Also, love the pink/green wall hanging-what is it made of and how did you hang it?
Funny, Sarah's and her roommate's beds were bunked and high up off the ground like your girl's. We separated them, too, and made spaces for each of them.
Can you email me (button below my face on my blog) and let me know the answer to above questions?
THANK YOU!
I know the next few weeks will be hard for you- I'm right there with you, too, as you know!
Hugs and a box of Kleenex,
~me

That is the most coordinated/pulled together dorm room I have ever seen, better than the tv design shows!
Is big sister's just as nice?

I loooove it! It turned out GREAT! I love pink, green and zebra!!! The pattern of the fabric on those pillows is GORGEOUS and I LOVE the zebra cording! Sooo cute! Did you make them? Everything turned out precious!

So, are you okay? There's no mention of tears.

Glad she's not rooming with the scary bear hunter chick!

It turned out great...just as I suspected! Just wanted to let you know both you and Miss Whimsy will be in my prayers in the weeks to come as you both adjust to the new season in your lives.

On another note, I posed a question to Sam the other day about moving day of our own freshman year. Was it really the hottest most humid day of the summer or was it just my unaccustomed MD blood? I may never know the real answer...but I do know I sweated more on that day than any day prior to it in my life. :) (Aren't you SO GLAD I shared that with you?)

Such a cute room!!! Do you still have other kids living at home or can you dig out your art room????!!
Sophomore dorms, we have learned are a little bigger. And the move in time is far less. As in two hours and we were, (ahem) excused from our duties, as she had made dinner plans with friends. What EVER.
Really, though, I was beyond grateful that is wasn't like the first year of dropping her off. I hear it doesn't get much better even if you have several kids....
xoxo
lynn

Oh my goodness - what memories you have brought back. Glad it's over! lol

Seeing the dorm room brings back memories only mine wasn't nearly this cute. Love those pillows.

Yea! It looks GREAT! What a fun room. I'm ready to move in! Y'all did a super job.