There was no contest for this week's simple pleasure. It's one as faithful as those seasons that I yakked about yesterday and something that I look forward to every year. 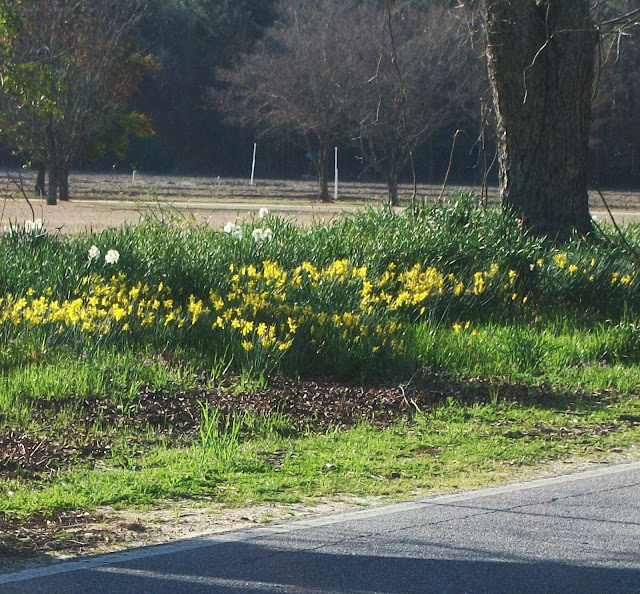 You see,  it's jonquil season on the country commute. 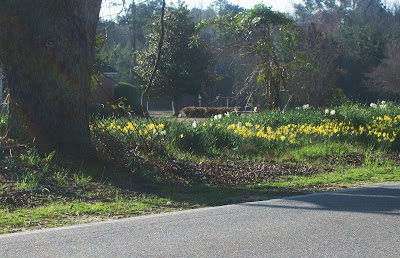 I explained my affection for the quirky yellow flower last year at this time, but since very few friends were around here then, I thought I would copy the applicable portion of the explanation again.  To those who have already read it, my apologies. 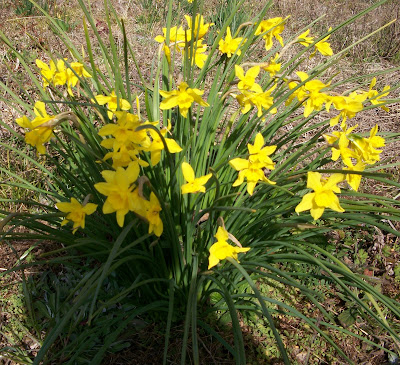 We join this yakabout already in progress...
When I met the man of the house all those years ago, we were both in college and living on ramen noodle budgets.  Since I was child number 4 of 4, and he was number 4 of 5, neither one of us was enjoying the limousine lifestyle.

In fact, there wasn't a set of wheels between us. Our dates were limited to those places within walking distance and usually involved anything that we could do for free.

So every afternoon, weather permitting, we would take a walk.

And we ( that would be mostly I ) would talk. I would yakkity yak across the campus and through the Athens side roads. (The man should probably wear a button of full disclosure that he knew exactly what he was getting when he married me…)

One afternoon, in the spring of our relationship, I noticed a patch of jonquils bursting into bloom. I was delighted. He called them weeds and said he wasn't at all fond of a jonquil, but then he reached down and plucked up a yellow weed bouquet just for me.

And that's how the whole thing started.

In the months that followed, he helped himself to a variety of plucked bouquets, most of which were pilfered from random gardens along our talking route. While I talked, he did flower surveillance and a commando raid on some unsuspecting blossom.

It was our first adventure.

Of course when the Duchess heard about the Great Plucking Adventure, she nearly fainted.

It was? Seriously, we never considered that gardeners would mind a random pluck or two in the interest of true love. I had always thought of flower lovers as the ultimate romantics.

Well, either due to guilt... or fear that there was an APB out for the phantom Romeo of Milledge Avenue… or probably because the newness of the relationship wore off… he eventually stopped the serial petal plucking.

But to this day, when I see a patch of jonquils burst forth in the early spring, I remember those walks and the skinny boy who used to pluck me flowers when he couldn't afford to take me to dinner.

And I pluck myself a bouquet... 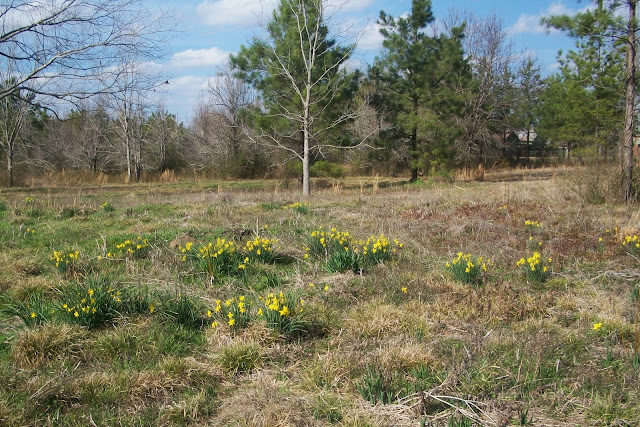 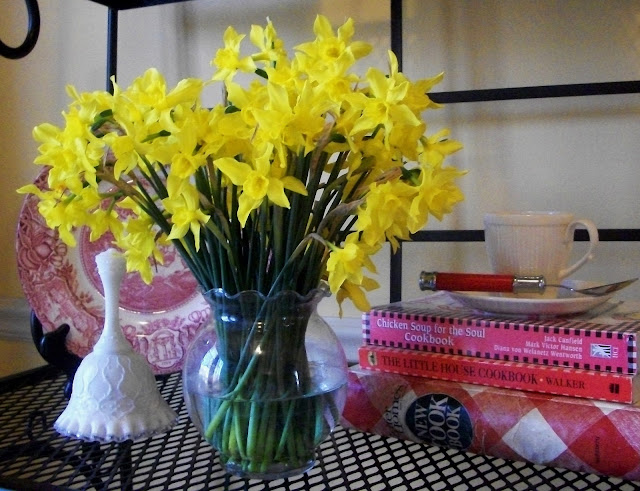 and it makes me smile.
Plucking up a memory is this week's simple pleasure.
*****
Joining today with Dayle at
A Collection of This and That.
Come over to read more Simple Pleasures.
yakked by Debbie on Thursday, February 24, 2011

labels: simple pleasures, the man of the house

You are a "hoot" and a joy..what precious memories...and ones that need told over an over again. Ours haven't started blooming here yet, but I am going to watch for them. Bringing them in doors to enjoy...a pure simple pleasure

if these are weeds...they're beautiful and I love love love your story. I can see the two of you in my mind. thanks Debbie...for being you...

How lucky you are that your daffs are blooming already! So envious. We are still covered with snow here. Enjoy for me for our day will surely come in time.
Cindy

Thanks Debbie for sharing such sweet post, I remember my dh stealing me a few bouquets too, and once in a while he will still stop by the roadside and bring me some. Beautiful jonquils, I always enjoy my visits with you. I love your sense of humor always so uplifting.Thanks for sharing
Sue

You asked about following my blog, I haven't put a followers gadget up yet, and am praying about it. But please keep visiting me.

I really love your plucked up memory this week! What a cute and romantic story. Love the humor you put in all of your blogs... it is such a pleasure to read!

Pick yourself a ton!!!

I did stop and pick some bluebonnets one year and later someone told me it was against the law... huh???

And the sweetest bouquet of all was when our youngest brought me a handful of weeds, straight from the neighborhood!

What a precious story. It is one of my favorite flowers too.

Ours are barely in bud right now. I expect an explosion of yellow, however, very soon along our highways, and in my garden!

Love this story, Debbie. Let's see...we have a flower stealing Romeo...a Bonnie and Clyde (I remember your post about the old house from a few months back). Your escapades are very entertaining!

Grace on the Narrow Path said...

Oh my goodness that is simply so sweet!!! What great memories!!! I love those flowers too!!! God bless you my friend and that skinny boy that picked/stole those flowers for you. LOL
Hugs,
Bren

Naturalized jonquils, daffodils...whatever...are such a joy to see! I love your memory of those happy yellow flowers.

Daffodils over roses anyday girlfriend!! My hubby knows that too! He hasn't brought a bouquet home yet, expecting it anyday. But, what precious memories - you have shared with us today. Gave me a lift from the "spring cleaning".

Loved your plucky story. I love daffodils, they'll be blooming over here soon too.

Debbie,
A lovely romantic story - that gets me every time! One of my very favorite flowers, too. Ours will be in bloom very soon, I see them emerging from the snow a little more every day!
I like your pictures of the Bradford pear trees taken over the past year. A great picture show!

Here in New England they grow along the old stone walls and look so pretty. We won't be seeing any for another few months though.

I remember you sharing this last year and it's just as sweet the second time around. Thank you for sharing again, I love it!

At The Picket Fence said...

I saw the title of this post and thought it might have something to do with eyebrows (plucking!) but this was way better! :-) My sweet hubby and I had our share of ramen noodle days too and spent many a date splitting meals or a coffee because that was all we could afford. Those were sweet times and this is a very sweet memory you shared with us!
Vanessa
P.S. I might have to go turn myself in now for all of the "weeds" I have helped myself to over the years! :-)

This was so much fun to read! The Jonquils and the memory are both beautiful! Thank you so much for sharing! Thank you, also for your very encouraging comments to me!

I love them too. One of my first bouquets from my husband was picked along the riverfront in his college town...also not legal, but I loved them and still do!

Gosh Debbie - you make laugh and cry at the same time!!
What a sweet, romantic post!
I love Jonquils and my hubby brings them into the house for me each Spring :-)
bless you..Trish

Gosh I can't imagine seeing these lovely flowers so soon - it's still February!!!

Thanks for lifting my spirits with this beauty as I VERY impatiently wait for Spring to start here in the Midwest.

I just loved your reminiscences - everything about your post made me smile! We are still mired in stubborn icy snow so seeing those lovely yellow blossoms gives me hope of Spring! And thanks so much for your comment on my Simple Pleasure :)

What a sweet, sweet story! I love to hear these little sweet details of people's lives. Hubby calls it nosy. I call it curious, but whatever!

I must admit I've been guilty of plucking a few myself. it's so pretty when they come up in February like that and we get one last snow falling all around them. Love that burst of yellow through the white! GORGEOUS!

Debbie, what a lovely love story between you and your hubby - sandie

Deb-rah! You married a thief, and now you've turned into one! This story is so sweet. I loved reading it, and I'm so glad you re-shared it, because I had not read it before. Beautiful pictures too. Your vase of jonquils is a happy sight, even though they were stolen!! laurie

Just seeing them on your table makes me smile. These are beautiful, as are your words! Love this simple pleasure!

What a lovely story!! It's always a good sign to see the first yellow of the year.

I hope you consider writing a book!! I would be first in line to have my copy autographed!!! I love the little yellow cuties too!!

What a lovely man - he'd just have to be to win such a lovely woman's heart.

I'm not calling that stealing - it's just borrowing a little of God's beauty. (Although, I'm glad that you didn't take a liking to BMW's - that just might have been felonious - just sayin')

such a sweet story,I had a smile on my face the entire way through the story. Jonquils are my all-time, most favoritest flower. ever.
xoxo
lynn

Hi Debbie,
Lucky you having such a romantic husband. A gift of flowers is always special,whether from the side of the road,the florist shop or a dandylion from the lawn.Lovely memories.
God Bless
Barb from Australia

I remember this post from last year too but it's always worth retelling. You can always pick a few from my yard and I won't turn you in to the law. Mine are especially pretty this spring. You'll have to come inspect. (Maybe use for a tablescape?)

That is the sweetest story I have ever read! That was so well written. I can see why you love them and him!

This is such a lovely story! So happy you shared!