I had planned to put this week's simple pleasure here last week to coincide with our Colonial Blues tablescape. (I'm "themey" like that...) You may recall, however, that my focus was interrupted by the simple pleasure of being a mom, and the blue themed simple pleasure was put on the back burner.


I'm OK with that.
I don't want my life to reflect my blog;
I want my blog to reflect my life.
I'm sharing my simply blue pleasure this morning instead.
Here it is.
Capturing the blue hour. 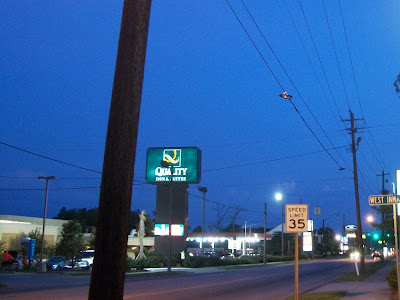 This simple pleasure is actually very new to me. Until reading about it in blogland several months ago, I didn't even know such a thing as the blue hour even existed.  But it does, and it exists with amazing consistency.

The blue hour is the name for the window of opportunity that God opens every evening and morning, just before sunrise, and just after sunset. It is the phrase that describes the few moments twice a day when the sky becomes an incredibly deep blanket of blue.

When I first saw pictures of the blue hour, I fell so in love with it that I tried to catch it spontaneously. I was certain that I'd be able to capture it most beautifully over an open field or other such quiet space.  I kept my eyes open, and when I thought that I might be in the moment, I would race to the nearest field with the shiny red Kodak, point, and click.

Nothing.
I blamed the shiny red Kodak.

Finally, I did what I should have done in the first place; I did a little research. In so doing, I discovered two things. First, the blue hour is easily predicted. In fact, when I enter my zip code at bluehoursite.com, I am given the precise time, roughly 30 minutes twice a day, in which the blue hour is visible in my local sky.


Unlike most simple pleasures, this one is intentional, not spontaneous.
I also discovered that the blue hour is best captured when it is illuminated. No wonder I couldn’t capture it over an open field! I had been expecting God to fly solo.


It doesn’t work that way.
Think about it:
To capture the blue hour,
you must look for the Glory of God
reflected in the light of men.
I can hardly stand it.
So now that I have the rules down, I plan this simple pleasure.
I seek out the illuminated places,
and make an appointment with God.
Here’s the blue hour over our local courthouse. 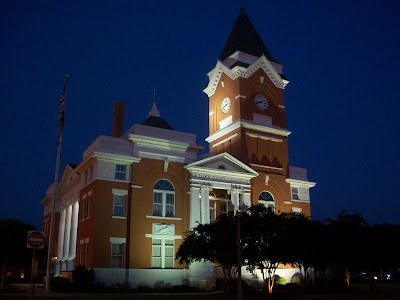 Here it is in Macon.
This is the steeple over the church that The Practical One attends while in school. 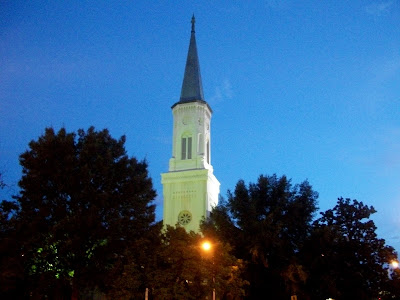 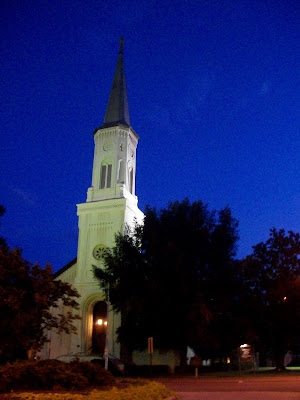 This one was taken over the Hay House, also in Macon. We went there recently for a Parent’s Weekend dinner. I almost missed this. I thought the show was over for the night but stopped the car and got out when I saw this curtain call. 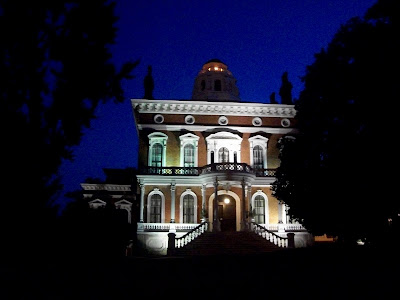 I am so enthralled by the blue hour that I find myself gushing about it. I’m 48 years old, I lamented to the husband. How in the world could I go 48 years and not know that such a beautiful thing existed?


Silly woman, he explained.
You weren’t looking.
Capturing the blue hour is this week’s simple pleasure.
*****
Sharing with Dayle at A Collection of This and That.
Clickity click to see the other simple pleasures.
It's a weekly treat.

AMAZING! Great shots of the blue hour...beautiful buildings, too! I must be more aware of this time!
Have a beautiful day~
;-D Kathleen

I learn so many good things from you! Thanks so much for sharing your beautiful blue hour photos...

That is amazing! And I had no idea such an hour even existed. Thanks for the helpful website - I know what I'll be doing between 8:29 and 9:03 tonight!

I am so thankful for blogland! Thank you for paying this forward for the rest of us to enjoy!

Love the photos...the shiny red kodak does good work! (As fate would have it, my parents recently bought your exact camera, I believe.)

Oh girl, you and me and the blue hour equal divine. I'm a blue hour fanatic but often have to catch mine on the fly when we're on the road. Isn't it just the most beautiful thing? And a perfect Simple Pleasures post... again!

Absolutely breathtaking! The pictures were so beautiful. Thanks for sharing this fairly new "thing" (can't spell the word I want, sorry) with us. I'll be on the lookout for it. A simple pleasure for sure.

I love this blog - the pictures - the simple pleasures - and the information is so great. I'm going to the bluehour now. Thanks.

I love this! I'm 44 years old and never heard of the blue hour either. Although I've probably captured some photos at just that right time, I didn't know there was a name for it. So very interesting! Unfortunately there have been no blue skies in Kuwait of late, and the sunrises and sunsets aren't as colorful as they are during the winter months (not that we really get a winter) -- thanks for stopping by my little corner of the world. Best wishes to you and yours, Tammy

Your shots are great! Sounds like you're having fun with this, it's always nice to learn something new:@)

Didn't know about the Blue Hour. But now I'm on the hunt.
Love your rules: research,illuminate,make an appointment with God.
This will be fun!
Thanks for letting me in on this phenomenon.

Thanks Christine for using my word that I couldn't spell...phenomenon!

Hi! Thank you so much for stopping by my blog and leaving such a sweet comment! I really am enjoying reading through yours and I just joined as your newest follower!
Vanessa
http://southerninmyheart.blogspot.com

I love your beautiful blue hour photos!
I've only just recently heard about this too, and I love the way your tied it in with God!
God Bless,,, Dee Dee

I am SO going to the website to look up our blue hour. And then I will find it and sigh with relief at beauty!
xo
lynn

My goodness, I'm sitting here nodding like a bobble-head to everyone else's comments! So, I don't feel so silly never having heard of the blue hour! Thanks for making my day a little better, Debbie .... I love your blog!

The Pleasures of Homemaking said...

So gorgeous! I never knew about the Blue Hour - learned something new today!

Oh I am thilled to know this...can't wait to get my camera and find just the right spot!
Thank for your kind blog comments today!
Elizabeth
http://www.justfollowingjesus.com

Hi Debbie,
I try and learn something new every day, and until tonight I never knew about the Blue Hour. I will now take notice. You captured your Blue hour so beautifully.thank you for sharing,AWESOME post. I am so glad to be able to be back visiting again. I so enjoyed this post, and hope you are having a wonderful summer too.
Thank you for visiting me and for taking the time to leave me the sweetest comment.
Hugs,
Sue

Wow, beautiful photos Debbie. I have never heard about the Blue Blur, but you can beat I will be looking for them now.

Thanks for stopping by and visiting with me.

Debbie,
I am going to Bluehoursite.com and put in my zip code and see what comes up - I'm going to take camera and seek out the Blue Hour!

Your blue hour shots are amazing, Debbie. Isn't it incredible that such a thing exists?...Christine

Only 48?! You're just a baby!
I was amazed at your pictures - gives a whole new meaning to the phrase, "I'm feeling a little blue today!"
Thank you for sharing - and I love that God is a mighty God, but also a God of simple pleasures!

Beautiful photos! Thanks to you, I only have to go 39 years without knowing about the blue hour...I had no idea!

Blue hour? who knew. The photos are awesome and when I read the post to go with them...wow.

Magnificently marvelous!! You have educated me! I have never heard of the blue hour. Can't wait to see if I can capture it! Your pictures are simply gorgeous!!

BTW, I just completed your novel, and it was equally as magnificent!!! LOL!

How BLUEteeful!
Thanks for the link to the bluehour site.
I am sure our Father is happy you make it to His appointments-I am going to make some blue hour appts., too!
Hugs,
~me

Your blue hour photos are beautiful, and I love your commentary and the way you relate this beautiful moment to God and the phrase "reflected in the light of man". Beautiful. After reading about the blue hour on a blog, I went through a phase of jumping up at the correct time each evening and running out with my camera. It was such fun, but I don't think I ever captured it as beautifully as you did in your photos. laurie

Thank you for the beautiful photos and the way you told about the Blue Hour. Just delightful.
(())

Beautiful photos!!! I recognized the Hay House because I had my bridal photos taken there, the first time:-) I have yet to get a photo of the blue hour.

The architecture of the buildings contrast beautifully against the blue sky. Thanks for your information about the blue hour. God creates many lovely moments for us.

Your blue hour shots are gorgeous! What pretty buildings!
Beth

What gorgeous blue pics!! I am amazed! I have lived for 51 years and have never heard of the blue hour. I can't wait to see ours. These are magnificent!
~ Julie

Wow! I hadn't heard of the blue hour before, but with a new camera on the way I can't wait to try out what I've learned from you!

Also loved the line "The blue hour is the name for the window of opportunity that God opens every evening and morning..."